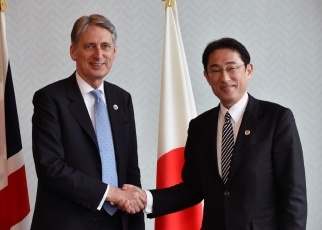 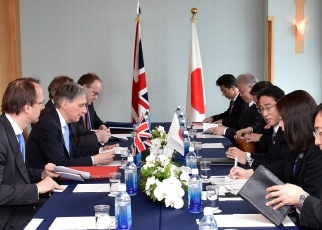 On April 10, from 4:55 p.m. for approximately 15 minutes, Mr. Fumio Kishida, Minister for Foreign Affairs of Japan, held a Foreign Minister’s Meeting with the Rt Hon Philip Hammond MP, Secretary of State for Foreign and Commonwealth Affairs of the UK on the occasion of the G7 Hiroshima Foreign Ministers’ Meeting. The overview of the meeting is as follows.

Both ministers agreed to continue to work together closely at the G7 Hiroshima Foreign Ministers’ Meeting and ensure that the outcomes of the meeting contribute to the success of the G7 Ise-Shima Summit Meeting in May.

2 Japan-UK cooperation in the area of security and defense

The two ministers confirmed that both Japan and the UK would promote the United Nations Office on Drugs and Crime’s (UNODC) Project “Improving Border Security in Tunisia” by making respective contributions, as part of concrete Japan-UK collaboration in assistance for developing countries in the area of security and defense which was confirmed at the Second Japan-UK Foreign and Defence Ministers’ Meeting (“2+2”) held in January 2016.

Both ministers affirmed the importance of Japan-UK cooperation in the area of security and defense, including counter-terrorism measures, and agreed to continue to promote collaboration in Asia and Africa.