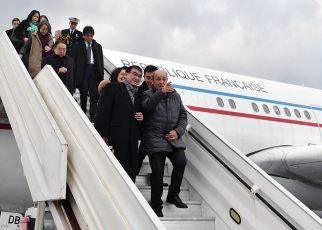 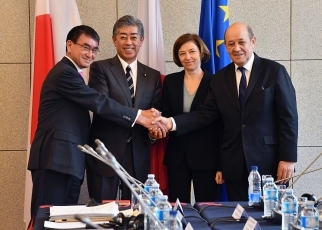 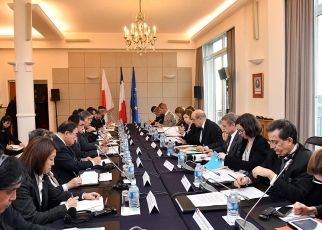 On January 11, Mr. Taro Kono, Minister for Foreign Affairs, and Mr. Takeshi Iwaya, Minister of Defense, who were visiting Brest, France, held the Fifth Japan-France Foreign and Defense Ministers’ Meeting (“2+2”) with H.E. Mr. Jean-Yves Le Drian, Minister for Europe and Foreign Affairs of the French Republic, and H.E. Ms. Florence Parly, Minister for the Armed Forces of the French Republic. The meeting lasted for a total of approximately 2 hours and 20 minutes, comprising a discussion from noon to 1:20 p.m., and a working lunch commencing at 1:30 p.m. until 2:30 p.m. A Joint Statement was issued. The overview of the meeting is as follows.

(1) The four Ministers shared the view that Japan and France, as “Exceptional Partners” sharing fundamental values and strategic interests, and the Chair of G20 and G7 respectively this year, would cooperate closely towards the peace and stability of the international community.

(2) The four Ministers shared the view that the two countries, which are both maritime and Pacific nations, would advance concrete cooperation in order to maintain and strengthen free and open Indo-Pacific. In particular, in order to materialize the cooperation in the maritime area, the four Ministers decided to establish the Japan-France Comprehensive Maritime Dialogue.

(2) The four Ministers shared the view that they would further cooperate in the areas of maritime security including Maritime Domain Awareness (MDA), and capacity-building assistance in Southeast Asian and Pacific Island countries, while ensuring synergy among the two countries’ efforts in the Indo-Pacific region.

(3) With regard to defense equipment and technology cooperation, the four Ministers welcomed the commencement of a joint research on next-generation mine-countermeasure technology, which would be the first cooperation project between the two countries in this area.

(4) In order to create and develop a free, fair, and safe cyberspace, the four Ministers shared the view that they would work closely together through various fora including the Japan- France Bilateral Consultations on Cybersecurity. In addition, the four Ministers welcomed the deepening of cooperation on space, and confirmed that they would further strengthen their cooperation in both the security and civilian sectors through the next Japan-France Comprehensive Dialogue on Space and other opportunities.

(1) The four Ministers reaffirmed the necessity to achieve the complete, verifiable and irreversible dismantlement (CVID) of all weapons of mass destruction and ballistic missiles of all ranges by North Korea and for fully implementing the relevant United Nations Security Council (UNSC) resolutions. Minister Kono and Minister Iwaya highly appreciated France’s decision to dispatch vessel and aircraft in the first half of this year to monitor illegal activities at sea, including “ship-to-ship” transfers. The four Ministers confirmed that they would continue to work closely for the full implementation of the UNSC resolutions.

(2) The four Ministers also exchanged views on the situation in Iran, including the Joint Comprehensive Plan of Action (JCPOA), and confirmed that Japan and France would continue to work closely on this issue.

(3) The four Ministers reaffirmed the importance of a free and open maritime order based on the rule of law, and expressed their strong opposition to unilateral actions increasing tensions.

(4) In addition, the four Ministers exchanged views on disarmament and non-proliferation, and regional situations including on Syria and Russia.