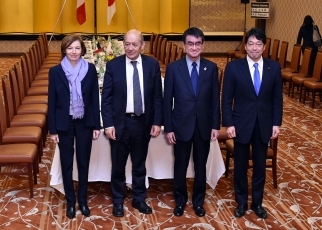 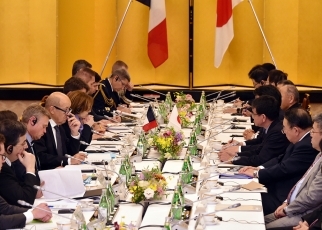 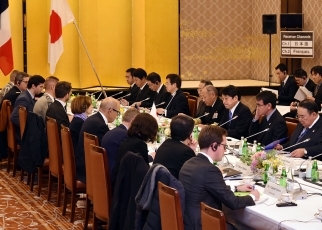 On January 26, Mr. Taro Kono, Minister for Foreign Affairs, and Mr. Itsunori Onodera, Minister of Defense, held the Fourth Japan-France Foreign and Defense Ministers’ Meeting (“2+2”) with H.E. Mr. Jean-Yves Le Drian, Minister for Europe and Foreign Affairs of the French Republic, and H.E. Ms. Florence Parly, Minister for the Armed Forces of the French Republic, both of whom are on their visit toJapan. The meeting lasted for a total of approximately two hours, comprising a discussion from 7:10 p.m. to 8:05 p.m., and a working dinner commencing at 8:25 p.m. until 9:25 p.m. A joint communique (French (PDF)

) was issued. The overview of the meeting is as follows.

(1) The four Ministers shared the view that at a time when the existing international order faces various challenges, Japan and France, which are “exceptional partners” sharing fundamental values, would cooperate closely in order to maintain and strengthen a free and open international order based on the rule of law.

, Japan welcomed further engagementto the region by France through such cooperation.

(1) The four Ministers welcomed that a broad agreement was recently reached on the Japan-France Acquisition and Cross Servicing Agreement (ACSA), which would support concrete cooperation between the two countries, and shared the view that they would continue to cooperate closely to promptly finalize the negotiations and to sign and conclude the Agreement.

(2) The four Ministers shared the view that they would strengthen collaboration in maritime security and maritime safety, and in supporting capacity-building in emerging countries in favour of a free and open Indo-Pacific region.

(3) In addition, the four Ministers welcomed that the first joint exercise undertaken by Japan, France, the United Kingdom and the United States (ARC17) took place on the occasion of a French naval fleet’s visit to Japan as part of last year’s training task group “Jeanne d’Arc 2017”. They also confirmed that a joint exercise with the Japan Self-Defense Forces would be held when the French naval frigate Vendemiaire visits Japan in February this year.

(4) With regard to defense equipment and technology cooperation, the four Ministers shared the view that joint research on next-generation mine-countermeasure technology, which would be the first cooperative project between the two countries in this area, would commencesoon.

(5) The four Ministers shared the view that they would concretize cooperation in the space field toward the next meeting of Japan-France comprehensive dialogue on space.

(6）The four Ministers also confirmed that the two countries will cooperate closely in the fields of counterterrorism and cyber areas, showing respective knowledge and experience.

(2) The four Ministers affirmed the importance of a free and open maritime order based on the rule of law, and shared the view that they would strongly oppose any unilateral actions that increase tensions as well as any attempts to change the status quo by force or coercion.

(3) The four Ministers also exchanged views on the situation in the Middle East, including Middle East peace process.