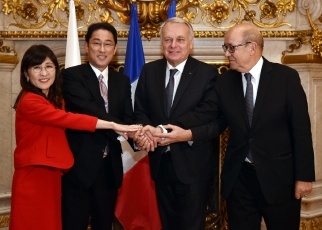 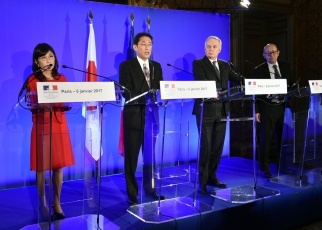 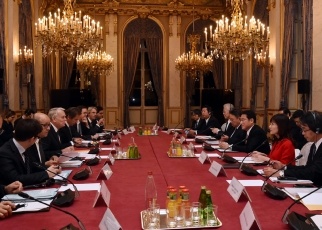 On January 6, Mr. Fumio Kishida, Minister for Foreign Affairs of Japan, and Ms. Tomomi Inada, Minister of Defense, who are visiting France, held the Third Japan-France Foreign and Defense Ministers' Meeting with H.E. Mr. Jean-Marc Ayrault, Minister of Foreign Affairs and International Development of France, and H.E. Mr. Jean-Yves Le Drian, Minister of Defense of France. The overview of the meeting is as follows. The meeting lasted for a total of approximately two hours, from 6:20 pm to 7:00pm for discussion and from 7:15pm to 8:30pm for working dinner. On this occasion, the joint communique was issued: (Joint Communique (French) (PDF)

(1) The four Ministers confirmed the strong determination of Japan and France, that are “exceptional partners” sharing fundamental values and have common responsibility to peace and stability of the international community, to collaborate in responding to international security challenges including those in the Asia-Pacific region.
(2) As the international order based on the rule of law is facing challenges, the four Ministers confirmed that they would closely cooperate to secure a free and open Indo-Pacific through the consolidation of the rule of law at sea.

(1) The four Ministers agreed to start negotiations of the Japan-France Acquisition and Cross Servicing Agreement (ACSA).
(2) The four Ministers welcomed the entry into force of the Agreement concerning the Transfer of Defense Equipment and Technology last December, and confirmed that they would materialize the cooperation regarding unmanned underwater vehicle (UUV) for mine detection as the first collaboration project.
(3) The four Ministers confirmed that they would deepen cooperation on promotion of joint exercises including one on the occasion of the visit by a French training cruiser “Jeanne d’Arc” to Japan, and on collaboration in assistance for capacity-building of Asian and African countries in such areas as maritime security and counter-terrorism.
(4) The four Ministers expressed their expectation that cooperation would be realized in the area of space including space situational awareness (SSA).

(1) Taking into account the security environment in the Asia Pacific region which is turning increasingly severe due to such situations as the South China Sea, the East China Sea, and North Korea, the Japanese side expressed its expectation of France’s more proactive and constructive response in the region. Moreover, the four Ministers shared concerns over the security environment in the region, and confirmed that they would closely cooperate including in efforts to consolidate the rule of law.
(2) The four Ministers reconfirmed the serious concern over the development of North Korea’s nuclear and ballistic missile program, and strongly urged North Korea to immediately resolve the abductions issue.
(3) Also, the four Ministers exchanged views on the Middle East situations including Syria, Iraq, Iran, and the Middle East peace process, as well as the situations of Russia and Ukraine.