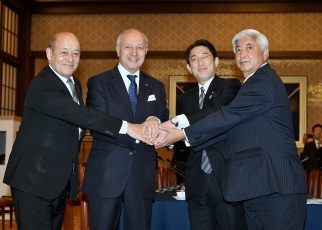 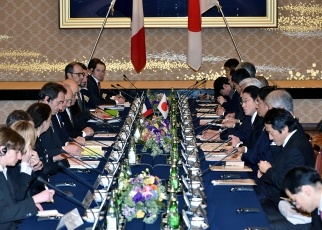 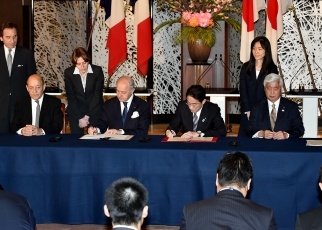 On Friday, March 13, for a total of approximately one hour and 40 minutes from 7 p.m. to 7:40 p.m. (discussion) and from 8:15 p.m. to 9:15 p.m. (working dinner), Mr. Fumio Kishida, Minister for Foreign Affairs, and Mr. Gen Nakatani, Minister of Defense, held the Second Japan-France Foreign and Defense Ministers’ Meeting in Tokyo with Mr. Laurent Fabius, Minister of Foreign Affairs and International Development, and Mr. Jean-Yves Le Drian, Minister of Defense of France. The overview is as follows.

Minister Kishida welcomed the two French ministers to Japan, while explaining that Japan and France have an “exceptional partnership” and that he wants to discuss specific cooperation in order to proactively contribute together to the peace, security and prosperity of the world. Minister Nakatani welcomed the holding of the meeting, and explained efforts relating to the development of seamless security legislation.

In response, Minister Fabius explained that Japan is the only country in Asia that France holds Foreign and Defense Ministers’ Meetings with, and France has a great deal of trust in Japan. He said France supports Japan’s efforts and initiative in trying to discharge greater responsibility for the world’s peace and stability, and makes a variety of cooperation between Japan and France possible. Additionally, Minister Le Drian also expressed support for Japan’s efforts in the security sector, including the development of seamless security legislation, and welcomed the progress of cooperation that has been made since the previous meeting, including the signing of the Agreement concerning the Transfer of Defence Equipment and Technology.

Based on the signing of this Agreement, the four ministers confirmed that, work on formulating specific cooperative projects relating to defense equipment will be accelerated, close exchanges of views on export controls will also be carried out, cooperation and exchanges in areas such as joint exercises and antipiracy measures will be advanced, and considerations will begin with the conclusion of an Acquisition and Cross-Servicing Agreement in perspective.

The Japanese side expressed gratitude for the cooperation and solidarity shown by France at the time of the terrorist incident regarding the murder of Japanese, while explaining Japan’s three pillars of foreign policy which were based on this incident and its stronger defense attaché presence in the Middle East. The French side once again extended its condolences over the murdered Japanese, and expressed its gratitude for Japan’s solidarity at the time of the shooting terrorism attacks in Paris. The four ministers confirmed that they will strengthen information exchange and cooperation in Africa and the Middle East, and will cooperate with the international community to engage in the fight against terrorism.

The four ministers discussed responses to the situation in Ukraine, where the ceasefire agreement remains fragile. They confirmed the importance of soundly fulfilling the Minsk Agreement and that they will cooperate to improve the situation while emphasizing coordination with the G7.

The Japanese side raised the issue of the security environment in East Asia, and explained the relationship with China since last year’s APEC, ballistic missile launches by North Korea and the abductions issue, the situation in the East China Sea and South China Sea, and increased activity by the Russian forces in the vicinity of Japan. The French side responded an explanation of the regional situation from Japan is meaningful, and the four ministers confirmed the importance of the rule of law and that they will continue to engage in closely exchanging views.

The French side explained France’s efforts in Mali, Central Africa, while voicing appreciation for Japan’s support and noting the necessity for further cooperation to achieve reconciliation and democratization. The four ministers also discussed responses to Boko Haram, and shared the view that based on the lessons of the terrorism incident in In Aménas, Algeria, they will strengthen information exchanges concerning the situation in Africa.

The four ministers welcomed the holding of the first Japan-France Cyber Dialogue in December last year, and shared the view that cooperation in cyber-related fields will be strengthened further in the future.

The four ministers appreciated that this meeting was beneficial, and shared the view that they will hold the next meeting at an appropriate time next year.