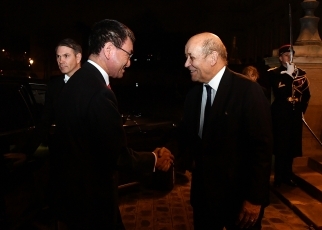 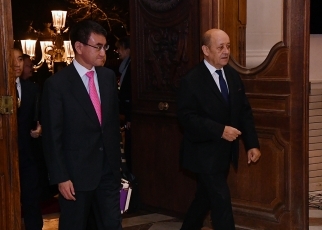 (2) The two Ministers also welcomed that the two countries have cooperated closely in the economic field, including business-to-business exchanges and civil nuclear energy.

(1) Minister Kono stated that he would like to enhance the synergy between the G20 and G7 in their efforts to expand free trade and to tackle climate change, and that at the G20 Summit this year, Japan would lead discussions towards realizing a free and open, inclusive and sustainable “human-centered future society” through achieving both economic growth and reduction of disparities.

(2) In response, Minister Le Drian explained about the G7 Biarritz Summit focusing on “fighting inequality .” The two Ministers shared the view that Japan and France, as the Chair of the G20 and G7, would cooperate in various areas, including climate change, ocean plastic waste, digitalization and artificial intelligence.

(1) The two Ministers confirmed that cooperation between Japan and the EU, as flag bearers of free trade, is essential amidst the rise of protectionist movement in the world. From this perspective, the two Ministers welcomed that the Japan-EU Economic Partnership Agreement (EPA) has to enter into force.