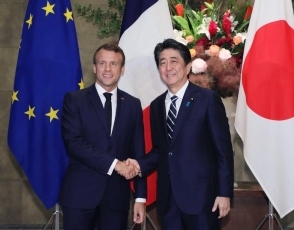 Photograph of the salute and
the guard of honor ceremony
(Photo: Cabinet Public Relations Office) 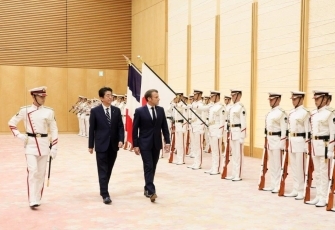 On June 26, commencing at 5:20 p.m. for approximately 90 minutes, Mr. Shinzo Abe, Prime Minister of Japan, held a summit meeting with H.E. Mr. Emmanuel Macron, President of the French Republic, who was paying an Official Visit to Japan. The overview of the meeting is as follows.

On the occasion of the summit meeting, the two leaders issued the Roadmap on Japan-France Cooperation for Opening New Horizons between Japan and France under an Exceptional Partnership (2019-2023) (French (PDF)

). The leaders then held a ceremony for the exchange of documents, before the joint press conference.

(1) Prime Minister Abe welcomed President Macron’s first visit to Japan as the President of the French Republic. Prime Minister Abe reiterated the importance of unifying the international community and of sending a strong message at the G20 Osaka Summit, and expressed his intention to work closely with President Macron, the Chair of G7 Summit 2019 in Biarritz , to lead the discussions. Furthermore, Prime Minister Abe stated that the Japan-France Acquisition and Cross-Servicing Agreement (ACSA), which entered into force today, symbolizes deepened cooperation in the Indo-Pacific and in the security and defense area between the two countries. Prime Minister Abe then stated that he would like to engage in meaningful exchanges of views with President Macron, for their cooperation towards the success of the G20 Osaka Summit and the development of the “Exceptional Partnership” between Japan and France.

The two leaders shared the view on the importance of making persistent efforts to look for common grounds and compromise at the G20 Osaka Summit, and shared the view that Japan and France would work closely together to send a strong message as the G20, on issues such as global trade, digital economy, environmental and global challenges and promotion of women’s empowerment.

3. Cooperation in the Indo-Pacific

(1) The two leaders shared the recognition that, amid various challenges to the international order based on the rule of law, one of the top priority issues that Japan and France, as maritime nations and as Indo-Pacific nations, should take the lead on is to make the Indo-Pacific inclusive, free, open, peaceful and prosperous for all partners,

(2) In this context, the two leaders shared the view to materialize cooperation, through the Japan-France Comprehensive Maritime Dialogue and other initiatives, mainly on the three pillars of (a) maritime security, (b) climate change, the environment and biodiversity, and (c) quality infrastructure.

(2) Prime Minister Abe requested that the EU’s and French Polynesia’s import restrictions on Japanese foods and feeds be eliminated as early as possible.

(3) With regard to culture and sports, the two leaders shared the view that Japan and France would exchange knowledge of large-scale international sports events and strengthen exchanges among the relevant organizations, given that they would host Rugby World Cups and Olympic and Paralympic Games successively.

(1) Regarding the situation surrounding North Korea, the two leaders reaffirmed that Japan and France would work closely together to realize the complete, verifiable and irreversible dismantlement of all WMDs and ballistic missiles of all ranges by North Korea, based on the United Nations Security Council resolutions. They also confirmed that Japan and France would continue to cooperate on measures against illegal ship-to-ship transfers by North Korea. In addition, Prime Minister Abe asked for understanding and cooperation towards the early resolution of the abductions issue, and recieved support from President Macron.

(2) In addition, the two leaders exchanged views on the situation regarding Iran. They shared concerns on heightened tensions in the Middle Eastern region, including Iran, and shared the view to cooperate towards easing tensions and stabilizing the situation.