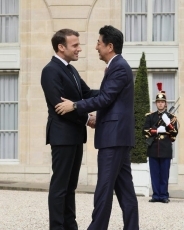 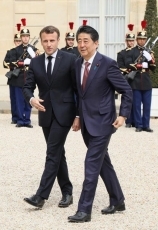 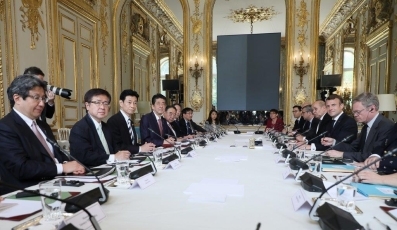 Japan-France Summit Meeting
(Photo: Cabinet Public Relations Office)
On April 23, commencing at 0:10 p.m. (7:10 p.m. on April 23, Japan time) for approximately 50 minutes, Mr. Shinzo Abe, Prime Minister of Japan, who was visiting France, held a summit meeting with H.E. Mr. Emmanuel Macron, President of the French Republic, followed by a working lunch that commenced at 1:00 p.m. for approximately 80 minutes. The overview of the meeting is as follows. 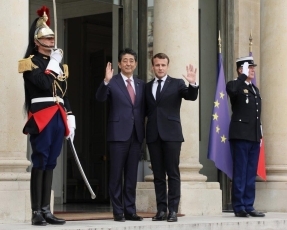 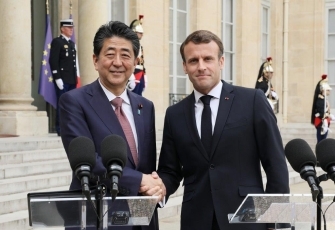 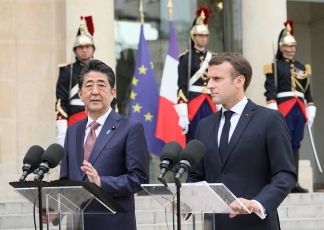 (1) The two leaders confirmed that they would increase synergy between the G20 and G7, and continue to work together as the Chairs of the G20 and G7 towards the success of the G7 Biarritz Summit and G20 Osaka Summit in 2019.

(2) Prime Minister Abe requested France’s strong support for the launch of the “Osaka Track” at the G20 Osaka Summit with a focus on data governance, especially e-commerce. The two leaders confirmed the necessity to maintain momentum for the reform of the World Trade Organization (WTO), based on a view that maintaining the free trade system is a priority for the international community. Furthermore, the two leaders agreed to send out a strong message on contributing to environmental and global issues, including climate change and marine plastic litter.

(1) The two leaders confirmed that they shared the view to maintain and strengthen a free and open Indo-Pacific, and that they would work together to implement concrete projects.

(2) Regarding security and defense, Prime Minister Abe welcomed the recent development of concrete cooperation; the joint training exercise between the French naval frigate Vendémiaire and the Maritime Self-Defense Force, a joint training under coordination with the French aircraft carrier Charles-de-Gaulle in the Indian Ocean, and cooperation toward the early entry into force of the Japan-France Acquisition and Cross Servicing Agreement (ACSA), among others. Based on the success of the Japan-France Foreign and Defense Ministers’ Meeting (“2+2”) held in January, the two leaders confirmed that they would work closely to realize cooperation on various fields including maritime security, and they shared the view to hold the first Japan-France Comprehensive Maritime Dialogue within the year.

(3) Regarding economic relations, the two leaders welcomed expandedcooperation between the two countries in the areas of artificial intelligence (AI), innovation, start-ups, and civil nuclear energy.

(2) Regarding the withdrawal of the UK from the EU, Prime Minister Abe expressed his expectation that the UK and the EU would avoid a “no deal” exit. In response, President Macron explained the current situation following the recent decisions of the European Council.

The two leaders also discussed regional situations, and confirmed that they would continue to hold close exchanges of views.

(1) Regarding the North Korea situation, the two leaders confirmed that they would continue to closely cooperate based on the United Nations Security Council resolutions, toward the achievement of complete, verifiable and irreversible dismantlement (CVID) of all weapons of mass destruction and ballistic missiles of all ranges by North Korea. President Macron stated that he would continue to contribute to ship-to-ship transfers through the deployment of patrol aircraft and ships, for which Prime Minister Abe expressed his great appreciation.

(2)  Regarding Africa, the two leaders shared the view that Japan and France would work together to gain the momentum for African development toward the G7 Summit and the subsequent Tokyo International Conference on African Development (TICAD7).

(3) The two leaders also exchanged views on the situation on Iran, including the Joint Comprehensive Plan of Action.