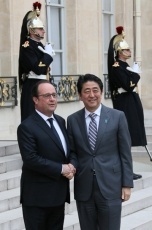 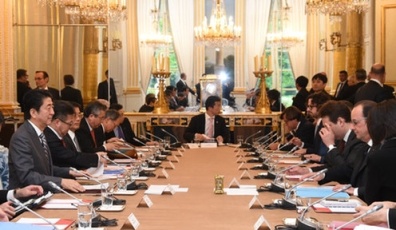 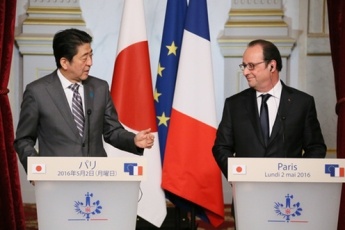 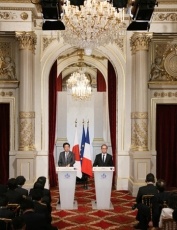 (1) President Hollande welcomed Prime Minister Abe on his visit to France. The President stated that he would like to exchange opinions on the global economy, regional situations, climate change, and other topics as a part of preparations for the G7 Summit Meeting, an important event, and that he would support Japan toward the success of the G7 Ise-Shima Summit.

(2) Prime Minister Abe stated that he was happy to visit France for the third straight year and that he would like to lead the G7 Ise-Shima Summit to a success in close cooperation with France. Prime Minister Abe also appreciated France’s expression of solidarity and condolences for the Kumamoto Earthquake.

(3) The two leaders agreed to robustly advance cooperation in such fields as security and defense, innovation, and Africa, through frequent exchange at the summit level, within the context of the Exceptional Partnership between Japan and France.

(1) Prime Minister Abe commented that he would like to showcase the G7 unity and a strong message on the global economy and the response to terrorism and refugee issues, which are the primary themes of the G7 summit. Prime Minister Abe also mentioned growing uncertainty of the global economy amid concerns about the economic slowdown of China, the decline in oil prices, and responses to violent extremism and refugees from the Middle East. He further stated that at such time the G7 should take a lead of the sustainable and robust growth of the global economy and that addressing terrorism and violent extremism was a top priority that the G7 nations should play a leading role in this regard.

(2) President Hollande expressed his agreement and stated that it would be natural for them to focus on economic growth at the G7 summit in light of the current global economic conditions.

(3) The two leaders agreed that they should avoid excessive fluctuations in foreign currency markets and that it would be necessary to effectively generate demand through the flexible fiscal policy, while advancing structural reforms.

(1) The two leaders agreed to further cooperation in such fields as security and defense, nuclear power, culture, and Africa. Specifically, they confirmed holding of “Japonism 2018”, an event showcasing in a large-scale the collection of essence of Japanese culture, in Paris in 2018, the year which marks the 160th anniversary of Japan-France diplomatic relations. The two leaders confirmed their intention to promote their cooperation in Africa in line with the three pillars, namely, sustainable development, health, and security, and also agreed that Japan and France would work together toward the TICAD VI, which would be held in Kenya in August 2016.

(2) The two leaders affirmed that they would work together to achieve an agreement in principle on the Japan-EU Economic Partnership Agreement (EPA) as early as possible within this year.

(1) The two leaders agreed that North Korea’s nuclear and missile developments were posing a grave threat to the peace and security of the international community, and affirmed the necessity to intensify the pressure on North Korea.

(2) The two leaders agreed that the Minsk Agreement was the only policy course for improvement of the situation in Ukraine. To that end, the two leaders affirmed the need to continue urging actions by both Ukraine and Russia, and confirmed the necessity to have dialogue with Russia, while maintaining pressure on it.

(3) Additionally, the two leaders exchanged views on China, the situation in the Middle East, and other topics, and agreed to work together toward the realization of the United Nations Security Council reforms.