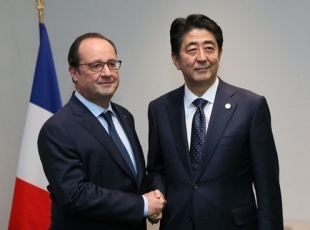 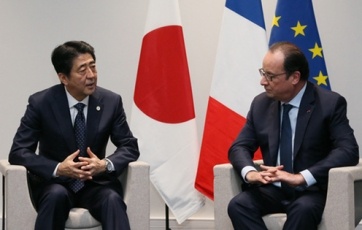 Photo: Cabinet Public Relations Office
On November 30 (local time), commencing at 3:25 p.m. for approximately 30 minutes, Mr. Shinzo Abe, Prime Minister of Japan, held a meeting with H.E. Mr. Fran?ois Hollande, President of the French Republic, during his visit to Paris to attend the 21st session of the Conference of the Parties (COP21). The overview of the meeting is as follows.

(1) At the beginning, President Hollande expressed his gratitude for Prime Minister Abe's visit to Paris, and stated that he hoped to cooperate closely in this difficult time. He also expressed his thanks for the message from Prime Minister Abe to the French people following the simultaneous terrorist attacks in Paris, and noted that Japan was also the victim of terrorism in the Algeria incident and other cases. Furthermore, he expressed his gratitude for Japan's additional contributions to climate change measures, and stated that he was looking forward to visiting Japan next year, which would also lead to further enhancement of the ''exceptional partnership'' between Japan and France.

(2) In response, Prime Minister Abe once again conveyed his sincere condolences to the casualties of the recent simultaneous terrorist attacks in Paris. He explained that he felt deep shock and anger over vicious acts of terrorism and resolutely denounces terrorism as an attack on our common values. He informed President Hollande that Japan stands with France in this time of difficulty. Additionally, he stated that Japan would actively engage in countering terrorism hand-in-hand with the international community. He expressed his respect for President Hollande's leadership in holding COP21 at this difficult time, and explained that he intended to cooperate on leading the meeting to success.

(1) President Hollande explained that it was important to have a large number of leaders participate in COP21 and is said that he hoped to negotiate an agreement document subsequently, saying that financial contribution would be extremely important in that regard. Furthermore, he expressed his expectation over Japan's efforts as the next G7 chair country.

(2) In response, Prime Minister Abe stated that Japan attached the utmost importance to building a fair and effective framework in which all countries participate and that it was essential for the Paris agreement to be a framework for advancing ambitions to reduce emissions, and hoping to make COP21 a success together with President Hollande. Furthermore, he explained that in order to encourage participation of developing countries, Japan had pledged to lift the value of its assistance from both the public and private sectors for developing countries to approximately 1.3 trillion yen a year in 2020, and as a result, the existing commitment of mobilizing 100 billion U.S. dollars per year by 2020 would be on track for realization, strongly expecting that this assistance would encourage the conclusion of this agreement.
In addition, Prime Minister Abe explained that Japan would formulate the ''Energy and Environment Innovation Strategy'' by next spring in order to boost the development of innovative energy and environmental technologies. He also stated that he would like to take part in the ''Mission Innovation'' scheduled to be held following the Japan-France Summit Meeting.

(4) The two leaders shared the view that they would promote emerging economies to join a new agreement including in the financial aspect.

(1) Prime Minister Abe commented that the international community should strengthen its unity in the fight against terrorism, and expressed his respect for President Hollande's enormous efforts to lead the international community, maintaining the momentum of international cooperation by visiting the United States, Russia, among others.
Additionally, he explained the support for enhancing counterterrorism capabilities of Middle Eastern and other countries that Japan had implemented thus far, including border control and investigation and prosecution capabilities. He also explained that Japan was also focusing on the support needed to restore stability in the Middle East region, such as the approximately 810 million U.S. dollars of aid that Japan would implement this year for refugees and internally-displaced persons in Syria and Iraq, including constructing shelters for internally-displaced persons in Iraq. Prime Minister Abe stated that through these efforts to stem outflows of refugees, Japan would like to contribute to preventing proliferation of terrorists. Furthermore, he commented that in the mid to long term, it would be necessary to build societies where extremism would not easily arise, and explained that Japan would continue providing support for human resource development, measures for countering youth unemployment, and redressing disparity. Finally, Prime Minister Abe explained that in its capacity as the G7 chair country next year, Japan intended to engage in counterterrorism in cooperation with the relevant countries, and he expressed his expectation on the development of the Vienna Process.

(2) In response, President Hollande commented that in addition to fighting Daesh (ISIL), measures to simultaneously counter the roots of terrorism are also important, and that France hoped the G7 would work together on countering terrorism including the financial aspect, such as money laundering. He also expressed his gratitude for Japan's support and initiatives in relation to the refugee issue, explained that it is important for refugees to remain in countries nearby their countries of origin, and stated that France also intended to provide support.