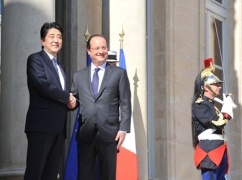 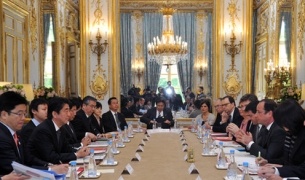 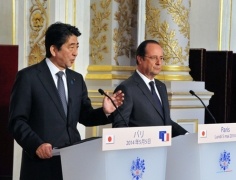 On May 5, commencing at 10:15 a.m. for approximately one hour and 15 minutes, Prime Minister Shinzo Abe held a Japan-France Summit Meeting with H.E. Mr. Francois Hollande, President of French Republic, at the Elysee palace. An overview of the meeting is as follows. (Attending on the France side were Prime Minister Mr. Manuel Valls, Minister of Foreign Affairs Mr. Laurent Fabius and Minister of Economy Mr. Arnaud Montebourg, among others. Attending on the Japan side was Deputy Chief Cabinet Secretary Katsunobu Kato, among others). Following the meeting, a “Japan-France Joint Press Release (outline (PDF)

Prime Minister Abe stated that Japan and France share fundamental values and are countries jointly engaged in the various challenges facing the international community, and amid the increasing acute of the global security environment, the need for cooperation between the two countries is increasing more than ever. In response, President Hollande replied when he visited Japan last year he was received by a large number of high-ranking government officials and determined to advance the Japan-France bilateral relationship. He stated various initiatives have been undertaken since then and he is overjoyed with the magnificent results that are emerging in all fields, including politics and security, economy and culture.

Prime Minister Abe said he wants Japan and France to learn each other’s policies for attaining a “society in which women shine,” and requested France’s cooperation on an international symposium on women that is scheduled to be held in Japan in September. President Hollande readily concurred.

A convention on mutual recognition of degrees at higher education institutions was signed immediately after the meeting in order to strengthen exchanges between students. And the two leaders shared the view that judo practitioners from Japan and France will be dispatched to Israel and Palestine. Additionally, the two leaders shared the view that they will cooperate in the run-up to the 2019 Rugby World Cup and the 2020 Tokyo Olympics and Paralympics.

(1) Ukraine
The two leaders shared recognition that support is needed to achieve stability in Ukraine, and Prime Minister Abe explained that the Government of Japan recently decided to newly contribute 300,000 euros to the Council of Europe’s emergency support for the restoration of democracy in Ukraine and 500,000 euros to the Organization for Security and Cooperation in Europe (OSCE)’s Special Monitoring Mission to Ukraine in order to promote national dialogue and integration. Additionally, the two leaders shared the recognition that the peaceful and democratic implementation of the Ukrainian presidential election scheduled for May 25 is important, and affirmed continued cooperation toward stability through dialogue.
(2) Situation in East Asia
The two leaders also exchanged views on the situation in East Asia, and in particular with regard to North Korea they shared the view that they will continue to cooperate to resolve the problems, including the abduction issue.