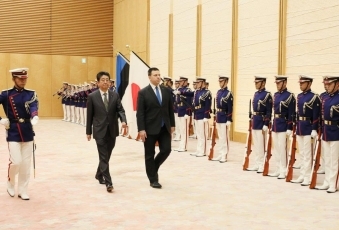 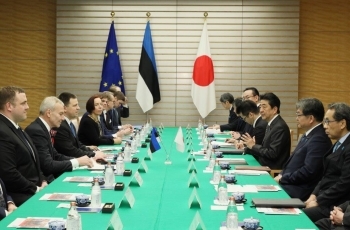 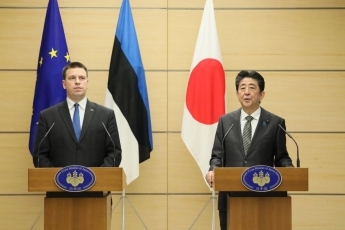 On February 10, commencing at around 6:15 p.m. for approximately 45 minutes, Mr. ABE Shinzo, Prime Minister of Japan, held a meeting with H.E. Mr. Jüri Ratas, Prime Minister of the Republic of Estonia, who is paying an official working visit to Japan. The overview of the meeting is as follows. The meeting was also attended by Mr. HAGIUDA Koichi, Minister of Education, Culture, Sports, Science and Technology, Mr. OKADA Naoki, Deputy Chief Cabinet Secretary, and others from the Japanese side and by H.E. Ms. Mailis Reps, Minister of Education and Research, Mr. Kaido Höövelson, MP, Chairman of the Estonia-Japan Parliamentary Group (known as Ozeki sumo wrestler Baruto Kaito), and others from the Estonian side.

Following the summit meeting, a ceremony for the exchange of three memoranda was held in the presence of the two leaders, including the memorandum of cooperation on handling of complaints between the National Consumer Affairs Center of Japan and the Consumer Protection and Technical Regulatory Authority of Estonia and those between Japanese and Estonian companies. Afterwards, a banquet hosted by Prime Minister Abe took place in a relaxed atmosphere, where the Prime Ministers exchanged their views on a broad range of topics, including economic relations and cultural exchanges.

(1) Prime Minister Abe welcomed Prime Minister Ratas to Japan, stating: “I would like to once again express my gratitude for the warm hospitality extended to me when I visited Estonia in January two years ago. Estonia, an important partner for Japan that shares fundamental values, has been a non-permanent member of the United Nations Security Council (UNSC) since this year. I would like to openly exchange our views on strengthening our bilateral relations, as well as on challenges in regional and international communities.”

(2) In response, Prime Minister Ratas stated, “January 12, 2018 was a memorable day as it marked the beginning of the 100th anniversary of Estonia's independence as well as being the day when the Prime Minister of Japan visited Estonia for the first time; a business delegation of nearly 20 companies has accompanied me on this visit; Estonia hopes to pursue further cooperation with Japan.”

(1) Prime Minister Abe stated, “In the economic area, we have witnessed remarkable enhancement of Japan-Estonia relations, including more business missions and stepped-up activities by JETRO and JBIC; this is particularly evident in corporate cooperation between the two countries in the area of ICT, of which Estonia is at the cutting edge in the world, and Japan continues to expect the further strengthening of bilateral economic relations.” Prime Minister Abe also stated, “In the area of cybersecurity, Japan participated in NATO’s cyber defence exercise Cyber Coalition that was held in Estonia in December last year and has dispatched Ministry of Defense personnel to the NATO Cooperative Cyber Defence Centre of Excellence located in Estonia, in addition to the regular exchanges of information and consultations between our authorities; it is expected that such initiatives will further enhance cybersecurity.”

(2) In response, Prime Minister Ratas stated, “ICT and cyber are areas where Estonia and Japan can promote meaningful cooperation, and I believe we can share a variety of experiences with each other; the Estonian company that will sign a memorandum today is a company that developed the information sharing system in Estonia.”

Prime Minister Abe stated, “Japan will strengthen its cooperation in the international arena with Estonia as a non-permanent member of the UNSC.”
Prime Minister Ratas responded, “We appreciate Japan’s support for Estonia’s bid for a non-permanent seat at the UNSC; Estonia attaches importance to the reform of the UNSC and strongly supports Japan’s bid for a permanent seat at the UNSC.”
The two leaders shared the view on continuing to collaborate to ensure that the Japan-Baltic Cooperation Dialogue, which was launched during Prime Minister Abe’s visit to the three Baltic States, leads to strengthened Japan-Baltic relations and concrete cooperation projects.

The two leaders held a wide-ranging discussions on the situations in East Asia and Europe, and confirmed that they will work together to address them. Regarding the situation in North Korea, the two leaders shared the view on continuing to cooperate closely toward the complete denuclearization of North Korea. Prime Minister Abe sought Prime Minister Ratas’ understanding and cooperation for the early resolution of the abductions issue and obtained his support.