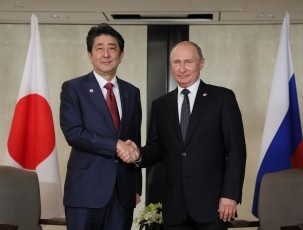 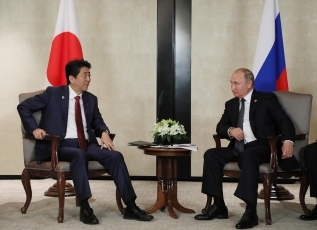 The two leaders shared the view that they would hold a Summit Meeting on the occasion of the G20 Buenos Aires Summit and that Prime Minister Abe would visit Russia early in the new year.

Regarding the joint economic activities on the Four Northern Islands, the two leaders welcomed the fact that a “business mission” was held in early October and confirmed the progress of the work. They also shared the view that they would further proceed with the work to implement the projects quickly in a manner that does not harm the legal positions of either side.

With regard to the humanitarian measures for the former island residents, Prime Minister Abe continued to encourage progress of cooperation for further confidence-building.

As a result of the one-on-one meeting, it was announced that “Prime Minister Abe agreed with President Putin to accelerate negotiations on a peace treaty based on the Japan-Soviet Joint Declaration of 1956.”

The two leaders welcomed the further realization of the Eight-point Cooperation Plan.

They confirmed that the Japan-Russia Intergovernmental Committee on Trade and Economic Issues would be held on December 18 in Tokyo.

4. Cooperation in the security field

The two leaders referred to the visit to Russia of Mr. Katsutoshi Kawano, Chief of Staff, Joint Staff, Japan Self-Defense Force, in early October and the anti-piracy drills with Russian Navy warships carried out on November 10 in the Gulf of Aden. They also shared the view that they would proceed with confidence-building between their defense authorities.

Prime Minister Abe mentioned the “Domodedovo Project” in the field of counter-narcotics and stated that he hoped to further advance cooperation regarding responses to non-traditional threats and to expand the fields of cooperation between Japan and Russia. President Putin agreed with this.

The two leaders held candid discussions on the North Korea situation. They confirmed that they would continue to cooperate closely on achieving the denuclearization of North Korea.