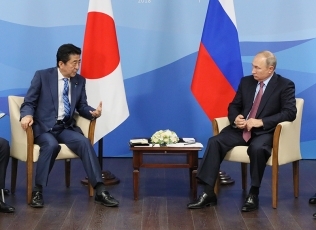 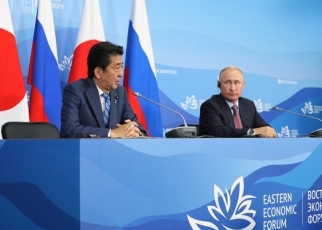 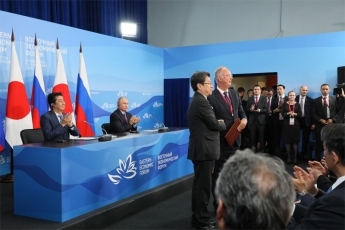 With regard to the Joint economic activities on the Four Northern Islands, the two leaders approved the “road map” for implementing the five candidate projects based on the agreement between the two leaders reached in Nagato city. The key pillars of that are as follows:

The two leaders appreciated the second grave visit by airplane held in July for the second straight year, and the establishment of temporary additional entry/exit points at the occasion of the visit to Taraku Island.
Prime Minister Abe encouraged President Putin for further cooperation and improvement. The two leaders also shared the view that the simplification of procedures will continue.

Prime Minister Abe emphasized that the full implementation of the relevant UN Security Council (UNSC) resolutions by the international community is essential for the denuclearization of the Korean peninsula, which is a common goal of Japan and Russia. On that basis, the two leaders shared the view that they will coordinate closely further.

3. Bilateral cooperation in a broad range of areas

The two leaders shared the view that they will hold meetings on the occasion of various international conferences. They also confirmed that a closing ceremony for the Japan-Russia exchange year will be held in the presence of Prime Minister Abe and President Putin on the occasion of the G20 Osaka Summit in June next year, and that a Japan-Russia Summit Meeting will be held in conjunction with that.

The two leaders welcomed the third “2+2” Ministerial Meeting and progress with exchanges between defense authorities. They announced that Mr. Katsutoshi Kawano, Chief of Staff, Joint Staff, Japan Self-Defense Force, will visit Russia in October, and that Japan and Russia will hold joint training in Rostov-on-Don in October this year in order to realize a drug detection dog training project.

The two leaders welcomed the advancement of cooperation under the “cooperation plan,” including projects in the Far East Region such as the modernization of Khabarovsk Novy Airport, Arctic LNG 2 and the LNG transshipment in the Kamchatka region, and in addition, that the Tax Convention will take effect in October. The two leaders shared the view that they will work further to realize the “cooperation plan” in order to advance the mutually beneficial Japan-Russia economic relationship. In addition, ahead of the meeting the two leaders visited Mazda Sollers Manufacturing Rus’ engine assembly plant together.
(Reference) Since the summit meeting in May, approximately 40 private-sector documents have been signed, having reached more than 150 projects.

The two leaders welcomed that mutual understanding is being promoted through the wide range of events in the Japan-Russia exchange year, and that new developments are emerging in people-to-people exchanges, including the restarting of Russia-Japan Governors’ Meetings. Prime Minister Abe mentioned the new relaxation of visa requirements for group tours of Russian citizens from October.