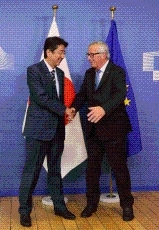 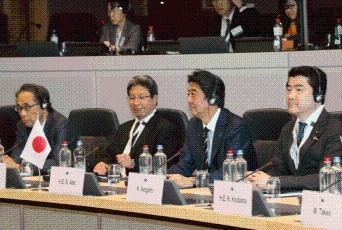 On Thursday, October 18, from 6:00 PM at local time (October 19 1:00 AM JST) for approximately 30 minutes, Mr. Shinzo Abe, Prime Minister of Japan, paying visit to Brussels, Belgium to attend the ASEM Summit Meeting, held a Leaders Meeting with H.E. Mr. Jean-Claude Juncker, President of the European Commission. The overview of the meeting is as follows.

(1) Prime Minister Abe expressed his respect for the leadership of the EU as chair of the ASEM Summit, expressing his hope to have a fruitful discussion on various agendas during the Summit.

(2) Both leaders confirmed that they will continue to cooperate towards an early entry into force of the Japan-EU EPA and SPA, signed at the occasion of the 25th Japan-EU Summit Meeting held in Tokyo in July this year. They shared their views on making utmost efforts to complete their respective domestic procedures by the end of this year for the conclusion and application of the Agreements.

2. The United Kingdom’s withdrawal from the EU

(1) President Junker explained to Prime Minister Abe about the discussion on the United Kingdom’s withdrawal from the EU, held during the European Council on October 17 and 18.

(2) In this regard, after expressing his concern over the current status of negotiations, Prime Minister Abe reiterated Japan’s stance that it is essential to ensure transparency, predictability and legal stability by establishing the transition period in order to minimize the negative impact on Japanese businesses in the EU.

3. Both leaders exchanged their views on other issues such as world economy, and shared the view on the Japan-EU collaboration for reformation of the WTO.