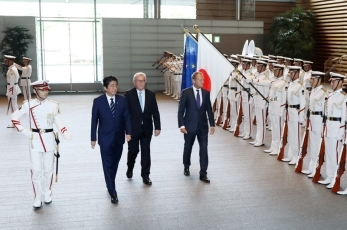 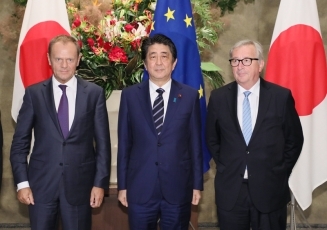 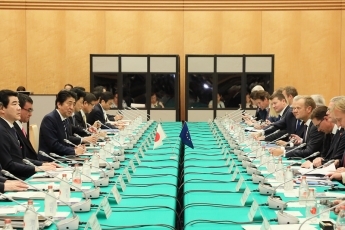 ) was held, along with a joint press occasion. In addition, Japan-EU Joint Statement (English (PDF)

) was issued on the occasion of the Summit Meeting.

1. The signing of the Japan-EU EPA and the SPA

(1) Both leaders signed the Japan-EU EPA and the SPA, as the culmination of negotiations that lasted more than five years.

(2) Prime Minister Abe expressed his recognition that the signing of the two Agreements is a valuable and epoch-making event that will elevate the Japan-EU relationship to a higher dimension, and explained that amid widening protectionist movements worldwide, the signing of the EPA will vividly demonstrate to the world the firm political will of Japan and the EU to lead the world keeping the flag of free trade waving high. Prime Minister Abe also stated that, with the EPA as a foundation, Japan and the EU intend to maintain and develop multilateral free trade systems centering on the World Trade Organization (WTO), as champions of free trade. Furthermore, with regard to the signing of the SPA, Prime Minister Abe expressed his recognition that the SPA will form the foundation for further deepening cooperation between Japan and the EU, which share fundamental values, for maintaining and expanding the free, open and rule-based international order, and for leading the peace and prosperity of the international community. Prime Minister Abe stated his intentention to further strengthen dialogue and cooperation in a broad range of fields based on the SPA.

(3) In response, President Tusk stated that Europe and Japan are separated by a long distance geographically, but politically and economically they could hardly be any closer. Furthermore, President Juncker expressed the view that the Japan-EU EPA puts fairness and values at its core, and it will set the model for the world.

(1) The United Kingdom’s withdrawal from the EU
Prime Minister Abe explained that he is closely following with concern the course of negotiations on the Withdrawal Agreement between the EU and the UK, and expressed the view that it will be essential to ensure transparency and predictability in order to prevent business activities from being negatively affected. Prime Minister Abe requested that timely information disclosure continues. In addition, Prime Minister Abe noted that many Japanese companies are operating in the UK, and it will be essential to ensure legal stability during the transition period.
In response, President Juncker explained the current situation of the EU-UK negotiations. In addition, the EU side presented the position that it will do its utmost efforts to conclude the negotiations so that the Withdrawal Agreement is finalized, including a transition period that ensures legal stability.

(2) Cross-border transfer of personal data
Prime Minister Abe welcomed the decision between the authorities of Japan and the EU on mutual adequacy finding, and their commitment to complete their necessary procedures for establishing a framework for mutual and smooth transfer of personal data between Japan and the EU by autumn 2018. In response, President Juncker pointed out the importance of data flow, and expressed his respect for the efforts of the relevant parties.

(3) In addition, both leaders also discussed security, connectivity, import restrictions on agricultural, forestry and fisheries products produced in Japan, the global economy and trade, and confirmed strategic cooperation in a broad range of fields. Both leaders also confirmed they will work closely together in the run-up to the Asia-Europe Meeting (ASEM) that will be held in Brussels in October this year.

Both leaders also exchanged views frankly on regional situations such as the situation in Asia, including the issue of North Korea, and the situation in the Middle East, including the Iran nuclear deal. In particular, with regard to the North Korean issue, both leaders once again confirmed the goal of realizing the complete, verifiable and irreversible dismantlement of all weapons of mass destruction and ballistic missiles of all ranges by North Korea, and shared the view that Japan and the EU will continue to coordinate toward the full implementation of the United Nations Security Council (UNSC) resolutions. In addition, Prime Minister Abe conveyed his determination to directly work with North Korea in the interests of promptly resolving the abductions issue. Prime Minister Abe requested understanding and cooperation regarding the issue, and was supported by President Tusk and President Juncker.