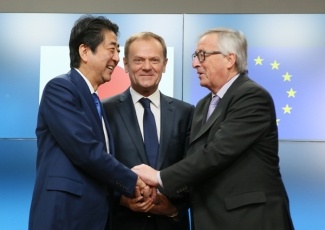 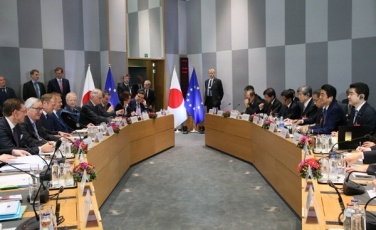 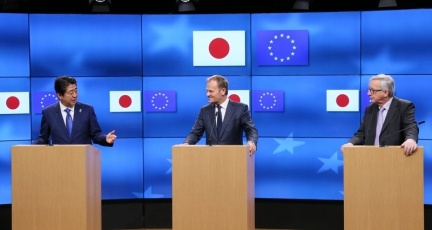 Prime Minister Abe expressed his congratulations to President Tusk on his re-election as the President of the European Council at its meeting on March 9. Prime Minister Abe also paid homage to the history of the integration of the European Union (EU) and its efforts to tackle various challenges it confronted in Europe and the international community, in light of the 60th anniversary of the signing of the Treaties of Rome. Furthermore, the leaders shared the view that, given the international community facing many difficult challenges and uncertainties, cooperation between Japan and Europe has never been as important before and that they would continue to work closely together to maintain and strengthen the rule-based international order of principles such as free trade and maritime security.

(1) Due to planned elections in some EU Member States and the anticipated start of “Brexit” negotiations, the year 2017 will mark an important milestone for Europe’s future. In this regard, Prime Minister Abe expressed his hope that discussions on the future of the EU will be directed to maintaining the unity of Europe. From the same perspective, he also stated that it is important for all stakeholders to ensure transparency and predictability as well as to set transitional periods through the “Brexit” negotiations, and requested that due consideration be made for the sake of smooth business activities of Japanese companies. In response, the EU side stated that, the EU will hold a European Council Meeting on April 29 on the basis of the UK’s announcement on March 20 that the notification of withdrawal will be made on March 29, and that they will seek the utmost certainty and transparency throughout the process.

(2) Regarding the Japan-EU Economic Partnership Agreement (EPA), Prime Minister Abe stated that it is important to continue to keep the flag of free trade and reach an agreement on fundamental elements of the EPA and the Japan-EU Strategic Partnership Agreement as early as possible, so as to set an example together to the whole world. The EU stated that the EPA will substantially stimulate the economies of both Japan and the EU. The EU side also pointed out that the remaining issues of the negotiations are yet to be resolved because of their difficult nature, and expressed nevertheless its intention to aim at a comprehensive and balanced agreement. The two sides thus affirmed their strong political will to that end.

(3) Prime Minister Abe welcomed the progress of the dialogue on the cross-border transfer of personal data, and expressed his intention to accelerate it towards the early establishment of a framework for mutual and smooth transfer, which ensures appropriate protection of personal information. Furthermore, Prime Minister Abe requested the removal of import restrictions on Japanese food and other products from Fukushima Prefecture and other areas.

3. Cooperation towards the G7 and G20 Summits

(1) The leaders affirmed that amidst concerns of emergence of protectionism and inward-looking mindset, it is precisely a free and open economy which forms the foundation of peace and prosperity. They also shared the view on the importance of demonstrating to the world of the unwavering values, unity and responsibility of the G7.
(2) The leaders shared the view that the need for reaffirming the employment of all policy tools to address the downward risks in the world economy and dissatisfaction against disparity. The leaders also confirmed that Japan and the EU will further accelerate measures to address the issue of excess production capacity, including in steel sector.

The leaders also held a frank exchange of views on regional issues such as the situation in Asia, including the South China Sea, the East China Sea and North Korea, as well as the situations in Europe and the Middle East.