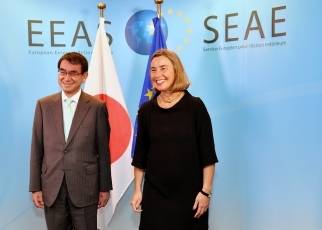 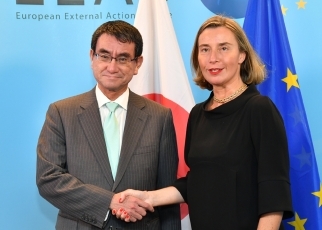 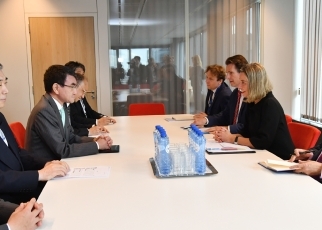 On April 25, commencing at 3:30 p.m. (local time) for approximately 30 minutes, Mr. Taro Kono, Minister for Foreign Affairs of Japan, held a meeting with Ms. Federica Mogherini, the High Representative of the European Union for Foreign Affairs and Security Policy, Vice-President of the European Commission, during his visit to Brussels to attend the Brussels conference on “Supporting the future of Syria and the region.” The overview of the meeting is as follows.

1. Minister Kono and High Representative Mogherini welcomed the agreement regarding the Strategic Partnership Agreement (SPA) and confirmed that they would continue to cooperate toward the early signing and entry into force of the Economic Partnership Agreement (EPA) and the SPA, and the importance of Japan and the EU closely cooperating as partners in light of the current international situation. Furthermore, they confirmed their intention to strengthen cooperation in a wide range of areas based on the SPA. Moreover, they agreed to cooperate closely for the ASEM Summit Meeting planned for October this year.

2. Minister Kono and High Representative Mogherini exchanged views on regional situations such as cooperation regarding the Nuclear Agreement with Iran, and the situation in Syria as well as that in North Korea.