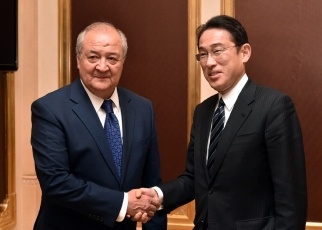 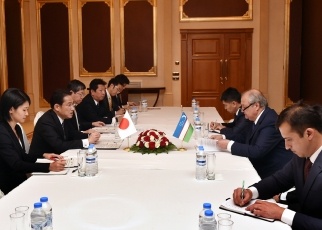 On April 30, commencing at 4 p.m. (local time) for approximately 40 minutes, Mr. Fumio Kishida, Minister for Foreign Affairs, held a foreign ministers’ meeting with H.E. Mr. Abdulaziz Kamilov, Minister of Foreign Affairs of the Republic of Uzbekistan, during his visit to Turkmenistan. The overview of the meeting is as follows.

Foreign Minister Kishida explained that, as a follow-up to Prime Minister Shinzo Abe’s 2015 visit to Uzbekistan, a project to establish a technology innovation center had been selected as a technical assistance project between Japan and Uzbekistan. Foreign Minister Kishida also noted that public and private economic exchanges were advancing through the Quality Infrastructure Conference and the Joint Working Group on Agriculture, and stated that he intended to expand and develop economic relations between Japan and Uzbekistan in a dynamic manner. Foreign Minister Kamilov expressed his gratitude for Japanese cooperation in economic areas and his intention to further expand tourism cooperation.

The two ministers also exchanged views on economic cooperation, such as the development of infrastructure, as well as cooperation in international fora.

Concerning the situation in North Korea, Foreign Minister Kishida stated that North Korea’s launch of yet another ballistic missile immediately after the United Nations Security Council held discussions on the denuclearization of North Korea is a direct challenge to the international community and can absolutely not be tolerated. Furthermore, Foreign Minister Kishida stated his intention to work together with Uzbekistan to ensure that North Korea renounces its nuclear and missile programs, including ensuring the effectiveness of the United Nations Security Council resolutions (PDF)

. Foreign Minister Kishida also sought understanding and support regarding the abductions issue. In response, Foreign Minister Kamilov firmly stated that the position of Uzbekistan with regard to North Korea is clear, explaining that Uzbekistan opposes North Korea’s missile launches and nuclear development, and that North Korea must comply with the United Nations Security Council resolutions.