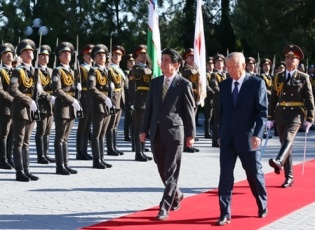 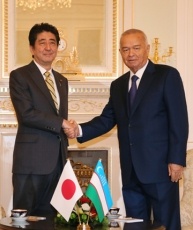 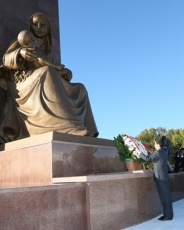 1 Itinerary of the visit

October 25 (Sunday)
Summit Meeting with H.E. Mr. Islam Karimov, President of the Republic of Uzbekistan
Meeting with economic mission
Luncheon with economic mission
Business forum
Offering of a floral tribute at the Independence and Humanitarianism Monument
Visit to the Japanese cemetery
Visit to the Alisher Navoi Opera and Ballet Theatre and attendance at a memorial concert
Dinner hosted by President Karimov

(1) Summit Meeting with H.E. Mr. Islam Karimov, President of the Republic of Uzbekistan (Announcement of a Japan- Uzbekistan Joint Statement following the meeting))

October 25, commencing at 10:00 a.m. local time until 11:50 a.m., Prime Minister Shinzo Abe, who was on an official visit to Uzbekistan, held a summit meeting that ran for approximately 1 hour and 50 minutes, which was substantially longer than initially scheduled, with H.E. Mr. Islam Karimov, President of the Republic of Uzbekistan. 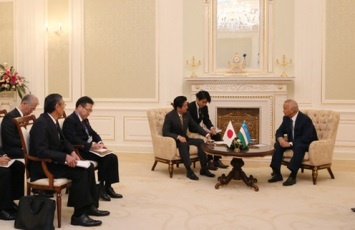 (i) General remarks
President Karimov first expressed gratitude for the economic assistance extended by Japan, explained that there are many fields where Japan's cooperation can be genuinely sensed, and stated that in areas such as the support for the railway to Afghanistan in particular, Japan has impressed the Uzbekistani people as a country which fulfills its promises properly and undertakes difficult tasks. Following this, President Karimov expressed his thoughts about Japan, noting that Prime Minister Abe will visit the site where Japanese citizens were detained in Tashkent and then understand that the people of Uzbekistan have always respected Japanese people. President Karimov also explained that the Alisher Navoi Opera and Ballet Theatre in the center of the city was constructed by Japanese citizens in the 1940s, and a plaque at the theatre stating it was built by Japanese captives has been rewritten to say it was built by Japanese citizens.

Prime Minister Abe thanked President Karimov for mentioning Japan's contributions, and expressed gratitude for the appreciation and respect the President displayed for contributions such as the theatre constructed by the Japanese detainees. Prime Minister Abe stated that he is happy to be the first Japanese Prime Minister to visit Uzbekistan in nine years, and explained that in partnership with the economic mission that is accompanying him on this trip he hopes to elevate the relationship of cooperation between the two countries to a higher dimension. Following that, Prime Minister Abe explained that he is overjoyed at the steady development that has been seen in bilateral relations since President Karimov visited Japan in 2011, and mentioned a decision on the reciprocal waiving of diplomatic visas.

President Karimov explained that he certainly hopes to take part in the business forum on the same day, and intends to convey words of welcome directly to Japanese companies at the event.

President Karimov expressed expectation over support for human resources training for young people in particular, and explained that the number of Uzbek students studying abroad is still small, and so he by all means hopes Japan will accept more. President Karimov noted that individuals who traveled to Japan to study now occupy important positions in the government and the business community. In response, Prime Minister Abe stated he is happy that Uzbek students who studied in Japan are playing active roles, and he vowed to make an effort to increase the number of such students.

Prime Minister Abe expressed the view that transportation and distribution are the most important challenges to development in the region.

The two leaders shared recognition that the ''Central Asia plus Japan'' framework is extremely important to regional stability, and President Karimov appreciated Japan's transparent and effective efforts to strengthen its relationship with Central Asia.

(ii) In regard to North Korea, Prime Minister Abe stated that the country is blatantly violating the United Nations (UN) Security Council Resolution by continuing to develop nuclear weapons and missiles, and that the international society should work together in calling on North Korea to restrain its provocative actions and strictly observe the UN Security Council Resolution. Prime Minister Abe also stated that the North Korea abduction issue is a high priority for Japan, and expressed his hope for the understanding and cooperation of Uzbekistan in working toward an early resolution.

(i) General remarks
Prime Minister Abe indicated that Japan will make further contributions to the peace and stability of the international society, from the position of ''Proactive Contribution to Peace'' and also based on the recently enacted ''Legislation for Peace and Security''. Prime Minister Abe called for support of Japan's efforts in this area.

(ii) United Nations
Prime Minister Abe stated that it is important to realize an early start to intergovernmental negotiations based on written agreements, so as to obtain specific outcomes of the reforms of the UN Security Council during the current session of the UN General Assembly. Prime Minister Abe also called for the active support and participation of Uzbekistan in regard to this.

(iii) Public- and private-sector business representatives from both countries also took part in the Forum in addition to President Karimov, and a lively exchange of views took place on strengthening Japan-Uzbekistan economic relations. 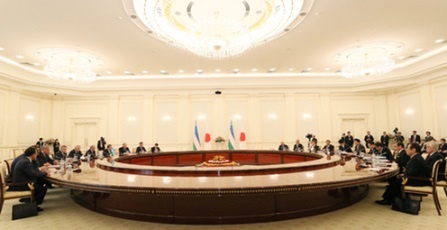 (3) Visit to the Japanese cemetery

(ii) Prime Minister Abe and Mrs. Abe received a greeting from Jalil Sultanov (Director, the Memorial Exposition Museum of the Japanese Citizens' Sojourn in Uzbekistan in the 1940s, and recipient of a  Foreign Minister's Commendation in 2015), who has had an interest in the history of Japanese detainees since the former Soviet Union era, and the cemetery administrator, and Prime Minister Abe took the opportunity to invite Director Sultanov to Japan.

(iii) Approximately 25,000 Japanese detainees were forcibly transported from the Far East and Siberia to Uzbekistan from 1945 to 1946, during the former Soviet Union era. Of them, 812 individuals who died in Uzbekistan are buried in 13 locations within the country. Within Tashkent City, a Japanese cemetery is established in one section of the publicly-operated Yakkasaray Cemetery, and 79 Japanese citizens are buried there. 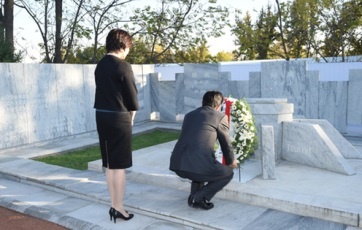 (i) Prime Minister Abe and Mrs. Abe visited the Alisher Navoi Opera and Ballet Theatre and attended a memorial concert for 40 minutes from 5:01 p.m. local time.

(ii) The Alisher Navoi Opera and Ballet Theatre seats 1,500 people and was completed in 1947. Japanese citizens who were detained in Tashkent were engaged in the construction after World War II. When a large earthquake struck Tashkent in 1966, all the buildings in the vicinity collapsed but the theatre did not, a fact that extols the soundness of the Japanese citizens' work.

(iii) At this memorial concert for the reopening of the Alisher Navoi Opera and Ballet Theatre following repair work that was carried out from 2012, Japan's ''Furusato'' was among the songs that were performed. It could be described as an event that marked the start of a new bond between Japan and Uzbekistan. 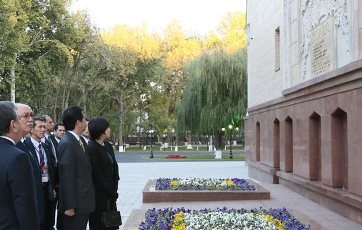 Prime Minister Abe once again expressed his gratitude for Uzbekistan's welcome and hospitality, and voiced his enthusiasm that this visit will result in rapid progress in the bilateral relationship. Prime Minister Abe also mentioned the history of the detainees, and stated that based on the outcomes of the Summit Meeting on the same day the two countries' relationship of friendship and cooperation will be advanced. The dinner was held in a genial and harmonious atmosphere throughout, and was attended by individuals with connections to both countries.