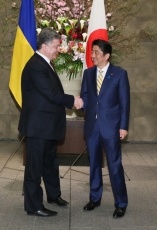 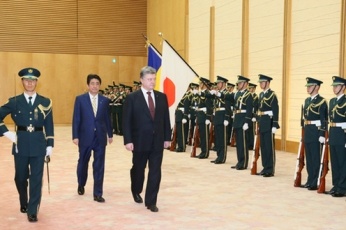 On Wednesday, April 6, commencing at 6:00 p.m. for approximately one hour and 40 minutes (a small group meeting was held for the last 30 minutes), Mr. Shinzo Abe, Prime Minister of Japan, held a summit meeting with H. E. Mr. Petro Poroshenko, President of Ukraine, during his working visit to Japan. The overview of the summit meeting is as follows. 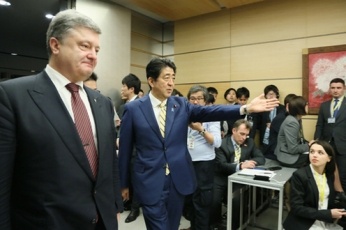 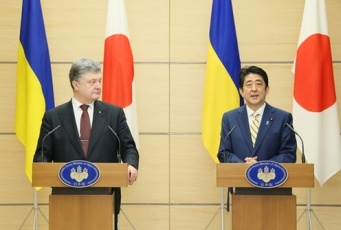 The two leaders held a joint press conference after the meeting. Prime Minister Abe and his spouse subsequently hosted a dinner reception, and the two leaders spoke on a wide range of topics regarding the relationship between the two countries, including culture and youth and sports exchange.

(2) In response, President Poroshenko expressed his appreciation for the invitation from Japan and his desire to strengthen Ukraine’s relationship with Japan in a wide range of areas, such as the economy and trade, nuclear safety, and people-to-people exchanges.

, and that while Japan understands the difficulties of the situation in Ukraine, it believes that implementation of the Minsk Agreements is the only path, it is important for Ukraine to fully implement the Minsk Agreements, and now is the time to demonstrate concrete results.

(2) In response, President Poroshenko provided a detailed explanation of the current situation in Ukraine and expressed his expectations for the initiative by Japan at the G7 Ise-Shima Summit next month.

3. Internal reforms in and assistance to Ukraine

(1) Prime Minister Abe expressed Japan’s strong hope for Ukraine to become a country with resilience and sustainability, the need for further acceleration of reforms at this juncture, and Japan’s intent to steadily implement the approximately 1.85 billion dollars of assistance that it has announced and thereby support Ukraine’s reform efforts as long as Ukraine is moving forward with reforms.

(2) Prime Minister Abe also welcomed the realization of 300 million dollars in cooperative loans with the World Bank in March and explained that, using the approximately 1.5 billion yen in assistance approved in January, Japan intends to contribute to the improvement of living conditions for people in eastern Ukraine and so on. Furthermore, Prime Minister Abe commented that Japan plans to continue efforts to assist a recovery in Ukraine’s economic conditions, such as by the renewal of the credit line of short-term trade insurance for 30 billion yen by Nippon Export and Investment Insurance in April and the dispatch of a Japanese financial expert to Kyiv in January. Additionally, Prime Minister Abe welcomed steady advances by cooperation in the energy field, a strong interest of President Poroshenko.

(3) In response, President Poroshenko expressed appreciation for Japan’s assistance once again and Ukraine’s strong commitment to the acceleration of internal reforms, such as anti-corruption measures and fiscal restructuring. President Poroshenko also noted Ukraine’s desire for further advances in infrastructure and energy-related cooperation with Japan.

(4) Prime Minister Abe commented that he is encouraged by President Poroshenko’s determination to proceed with reforms.

(1) Prime Minster Abe explained that in the area of people-to-people exchanges that the decision to begin mutual operation of diplomatic visa exemptions from June 1, 2016 is a significant outcome and that Japan plans to invite roughly 100 Ukrainians to Japan for training again this fiscal year, as it did last fiscal year. Additionally, in the economic area, he welcomed the entry into force of the Japan-Ukraine Investment Agreement in November 2015 (PDF)

and expressed Japan’s desire to conduct JETRO mission dispatches and hold the sixth Japan-Ukraine Economic Joint Meeting at proper timings and hope for further presence of Japanese companies in the Ukrainian market.

(2) Furthermore, Prime Minister Abe noted that this year marks five years since the accident at the Fukushima Daiichi Nuclear Power Station and 30 years since the accident at the Chernobyl Nuclear Power Plant and expressed Japan’s desire to make further progress with Fukushima-Chernobyl cooperation, including holding the fourth meeting of the Japan-Ukraine Joint Committee for the Cooperation to Advance Aftermath Response to Accidents at Nuclear Power Stations within the year. Prime Minister Abe also mentioned that it is extremely important to build an interim storage facility for spent fuel from the Chernobyl nuclear site and that Japan has decided this time to make an additional contribution of approximately 3.5 million euros.

(3) In response, President Poroshenko expressed his satisfaction with steady development in the Japan-Ukraine relationship and his will to make 2017 the “Year of Japan in Ukraine” to mark the 25th anniversary of the diplomatic relationship and to strengthen collaboration with Japan in the field of Chernobyl assistance.

(1) Prime Minister Abe expressed his gratitude for Ukraine’s support for Japan’s bid to become a permanent member of the United Nations Security Council and his pleasure that Japan and Ukraine are serving together as non-permanent members of the United Nations Security Council this year. He also commented that Japan hopes to strengthen cooperation in the international arena, including at the Security Council, and that it is very important for the international community to respond resolutely to North Korea’s provocative actions.