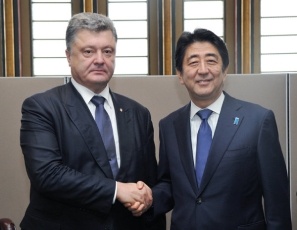 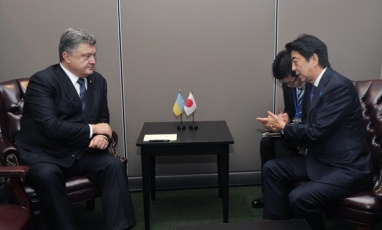 On September 29 from 6 a.m. (September 28 at 5 p.m., local time) for approximately 35 minutes Mr. Shinzo Abe, Prime Minister of Japan, held a summit meeting with Mr. Petro Oleksiyovych Poroshenko, President of Ukraine, at the United Nations Headquarters. An overview of the meeting is as follows: (From the Ukrainian side, Mr. Pavlo Klimkin, Minister for Foreign Affairs of Ukraine, Mr.Kostiantyn Yelisieiev, Deputy Head of the Presidential Administration of Ukraine and others attended the meeting. From the Japanese side, Mr. Shinsuke Sugiyama, Deputy Minister for Foreign Affairs, and others attended the meeting.)

2. Situation in Ukraine and Russia

Prime Minister Abe indicated that the cease-fire agreement in eastern Ukraine from September 1 is generally being upheld, and stated the situation still needs to be carefully monitored while also taking into account the outcome of the four-country summit meeting to be held under the Normandy Format on October 2. Prime Minister Abe also reaffirmed his intention for Japan, as the host country of the next G7 meeting, to play an even more proactive role towards achieving a diplomatic solution of the situation in Ukraine, while continuing to stress the importance of the solidarity of the G7. In response to this, President Poroshenko provided explanations on the current situation in Ukraine, and acknowledged the importance of working with Japan and the G7 to resolve this issue.

3. Internal reforms in Ukraine and assistance to Ukraine

Prime Minister Abe applauded the concrete advancements that have been made in the deployment of people, financial assistance, energy and other areas since the summit meeting with President Poroshenko this June, while also indicating that as long as the Ukraine proceeds with its internal reforms, Japan will continue to provide support to Ukraine in a wide range of fields, including the approximately USD 18.4 billion in assistance that has already been announced. In response to this, President Poroshenko once again expressed his deep gratitude for Japan’s assistance, and his strong intention to proceed with internal reforms in Ukraine. President Poroshenko also stated his earnest hope for the further entry of Japanese companies into the Ukrainian market.

Prime Minister Abe stated there has been steady progress in bilateral relations in a wide range of fields, such as people to people exchanges and the economy. Prime Minister Abe also indicated that particularly in the economic front, he is aiming for the early effectuation of the Japan-Ukraine Investment Agreement that was approved in Japan’s National Diet in September. In response to this, President Poroshenko stated that relations between Japan and Ukraine are currently at their historically highest ever level, and this has been aided by the mutual trust between the two countries. President Poroshenko also once again expressed his sincere gratitude for Japan’s assistance. Both leaders shared the view that Japan and Ukraine would work closely also in the international arena.