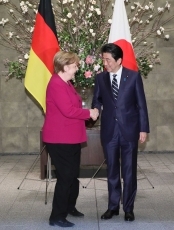 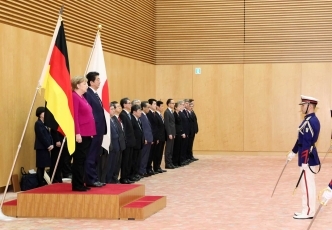 On Monday, February 4, commencing at 6:20 p.m. for approximately 45 minutes, Mr. Shinzo Abe, Prime Minister of Japan, held a meeting with H.E. Dr. Angela Merkel, Federal Chancellor of the Federal Republic of Germany, during her official visit to Japan. The overview of the meeting is as follows.

At the beginning, Prime Minister Abe welcomed Chancellor Merkel’s first visit to Japan in approximately two and a half years and appreciated that Chancellor Merkel traveled such a long way only to visit Japan. Prime Minister Abe stated that Japan and Germany have an ever-growing role to play in the world amid widening protectionist movements worldwide and as the United Kingdom heads towards withdrawal from the European Union (EU), and that he hoped to further elevate the Japan-Germany partnership to greater heights towards achieving a rules-based international order and world prosperity. In addition, Prime Minister Abe stated that, towards the G20 Osaka Summit, he would like Japan and Germany to lead initiatives to drive economic growth through promotion of free trade and innovations.

In response, Chancellor Merkel stated that she was glad that she could visit Japan for the first time in two and a half years, that Japan and Germany are leading flag bearers for a rules-based international order, that she looked forward to discussing common issues facing Japan and Germany as well as global issues, that the entry into force of the Japan-EU Economic Partnership Agreement (EPA) sends an important signal to the world, and that she would like to deepen economic as well as science and technology cooperation.

Furthermore, ahead of the G20 Osaka Summit, Prime Minister Abe explained his plan to propose the launching of the “Osaka Track” for discussing data governance at the Summit, focusing on e-commerce. Prime Minister Abe also explained that he would like to make efforts to drive world economic growth by promoting free trade and innovation, while engaging in reducing disparities, and contributing to addressing environmental and global issues, so that a strong message will be sent out.

Chancellor Merkel expressed her support for Prime Minister Abe’s proposal and commented on concrete areas of cooperation, such as climate change, ocean plastic waste, health, Africa, and women’s empowerment. The two leaders then shared the view that they will cooperate towards the successful holding of the G20 Osaka Summit.

(1) Cooperation for stability and prosperity of the international society

The two leaders welcomed that the negotiations to conclude an agreement on the security of information reached an agreement in principle, and affirmed that they would seize this opportunity to promote cooperation in the areas of security and defense.

The two leaders also shared the view on expanding the horizon of bilateral cooperation for the stability and prosperity of the international society. The two leaders exchanged views regarding concrete cooperation to be implemented, and confirmed that the two countries would cooperate in areas such as achievement of a free and open Indo-Pacific, democratic nation-building in Myanmar in a mutually complementary manner, peace and stability in Africa including the Sahel region and support for its sustainable development, support for the EU accession of Western Balkan countries, and capacity-building assistance in the field of the United Nations peacekeeping operations.

The two leaders shared the view that they will further advance collaboration between Germany’s Industry 4.0 and Japan’s Society 5.0, that the two countries would lead the Fourth Industrial Revolution, and that they would pave the way for the creation of a prosperous future society that makes use of advanced technologies. The two leaders affirmed that the two countries would strengthen joint research in the areas of autonomous driving, artificial intelligence (AI), and Internet of Things (IoT).

The two leaders welcomed the entry into force of the Japan-EU EPA on February 1, and confirmed that they would further deepen their bilateral economic relations within the world’s largest zone of free developed economies.

The two leaders confirmed that they would designate 2021 as the 160th Anniversary of Japan-Germany Friendship and that it would serve as an opportunity to further deepen mutual understanding and exchanges between the two countries.

With regard to the North Korean situation, the two leaders shared the view that the complete, verifiable and irreversible dismantlement (CVID) of all weapons of mass destruction and ballistic missiles of all ranges by North Korea is necessary as well as the full implementation of United Nations Security Council Resolutions. In addition, Prime Minister Abe requested Germany’s understanding and cooperation towards the early resolution of the abductions issue and obtained Chancellor Merkel’s support.

Regarding Russia, Prime Minister Abe explained the situation of negotiations towards resolving the Northern Territories issue, while touching upon the recent Japan-Russia Summit Meeting.