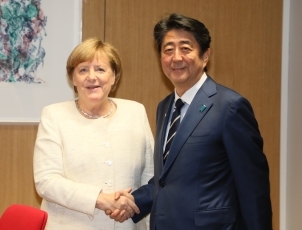 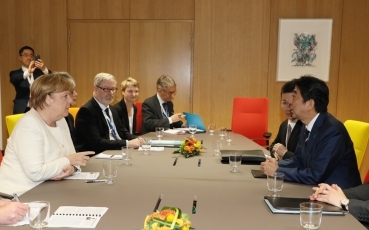 On Thursday, October 18, commencing at 6:55 p.m. (local time) for approximately 20 minutes, Mr. Shinzo Abe, Prime Minister of Japan, who was visiting Brussels in Belgium to attend the Asia-Europe Meeting (ASEM), held a meeting with H.E. Dr. Angela Merkel, Federal Chancellor of the Federal Republic of Germany. The overview of the meeting is as follows.

Prime Minister Abe stated that he was pleased to meet with Chancellor Merkel again after the G7 Charlevoix Summit, and that he would like to promote cooperation in the security and the economy fields as well as regarding Western Balkan countries toward Chancellor Merkel’s upcoming visit to Japan.
Chancellor Merkel also expressed that she was pleased to meet with Prime Minister Abe again, and extended her congratulations on his reelection in the LDP Presidential Election. In addition, Chancellor Merkel stated that she would like to proceed with preparations toward her upcoming visit to Japan. She also stressed that Japan and Germany, as well as Prime Minister Abe and she, are extremely strong partners, sharing positions on various issues. She also stated that she would like to continue to promote cooperation in fields such as economy, science and technology, and security.

The two leaders shared the viewsthat Japan-Europe and Japan-Germany cooperation is essential for the promotion of free trade, and that they will continue to cooperate toward the earlyentry into force of the Japan-EU Economic Partnership Agreement (EPA) and the Japan-EU Strategic Partnership Agreement (SPA). They confirmed the importance of the rule-based multilateral trading system centered on the World Trade Organization (WTO). In addition, the two leaders exchanged views on the UK’s withdrawal from the EU.

The two leaders shared the views that complete implementation of the United Nations Security Council (UNSC) Resolutions is necessary for the denuclearization of the Korean Peninsula, and confirmed that the two countries would cooperate closely. In addition, Prime Minister Abe requested Germany’s understanding and cooperation towards promptly resolving the abductions issue, and he obtained support from Chancellor Merkel.