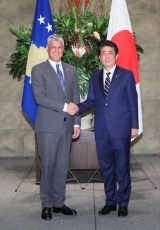 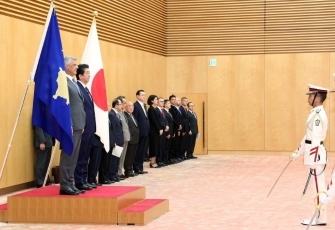 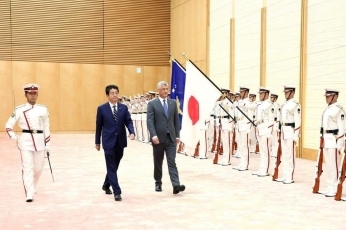 On September 13, commencing at around 6:10 p.m. for approximately 40 minutes, Mr. Shinzo Abe, Prime Minister of Japan, held a Summit meeting with H.E. Mr. Hashim Thaci, President of the Republic of Kosovo, who is paying an official working visit to Japan. The overview of the meeting is as follows. The meeting was attended by Mr. Naoki Okada, Deputy Chief Cabinet Secretary; Mr. Eiichi Hasegawa, Special Advisor to the Prime Minister; Mr. Isao Iijima, Special Advisor to the Cabinet, and others on the Japanese side.

(2) Prime Minister Abe stated that Japan has consistently supported Kosovo’s state-building efforts, and that Japan will continue to support Kosovo in areas such as environment. The two leaders also shared the view on advancing cooperation in the economic area. As part of this, Prime Minister Abe stated that Japan will host a business seminar targeted at Japanese companies in Vienna next month, which will introduce the business climate in Kosovo. In response, President Thaci welcomed the seminar, expecting further investment from Japan, and stated that Kosovo is considering the possibility of establishment of a business park for Japanese investment.

(3) The two leaders shared the view on promoting people-to-people exchanges, including sports exchanges on the occasion of the 2020 Tokyo Olympic Games

3. Situation in the Western Balkans

(2) The two leaders exchanged views on the situation of the Western Balkans. President Thaci expressed his commitment to dialogue aimed at mutual recognition between Kosovo and Serbia.

The two leaders shared the view to continue to coordinate closely for the denuclearization of North Korea. In addition, Prime Minister Abe requested President Thaci’s understanding and cooperation toward the early resolution of the abductions issue and obtained President Thaci’s support.

5. Cooperation in the International Arena

The two leaders shared the view on promoting cooperation in the international arena.