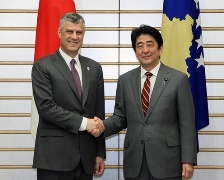 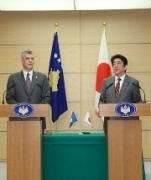 On April 14, commencing at 11:15 a.m. for approximately 30 minutes, Prime Minister Shinzo Abe held a summit meeting with H.E. Mr. Hashim Thaci, Prime Minister of the Republic of Kosovo, who is currently visiting Japan. The overview of the meeting is as follows. Following the meeting, the two leaders signed a Joint Statement (PDF)

on Cooperation between Japan and the Republic of Kosovo and held a joint press conference.

Prime Minister Abe mentioned that the Parliamentary Friendship League of Japan-Kosovo was recently established in Japan, and expressed his hope for the further active exchanges among parliamentary members. Prime Minister Abe also touched upon the fact that Japan has provided Kosovo with 1.4 billion Japanese yen in Official Development Assistance to date, and that Japan intends to continue to support the stabilization of Kosovo’s socioeconomic foundation in accordance with the country’s needs. Prime Minister Thaci responded by expressing his appreciation with regard to Japan’s support for Kosovo to date, and regarding the fact that Japan was one of the first countries to recognize Kosovo following its independence.

3. Global cooperation based on shared values Prime Minister Abe explained that Japan would step up its contributions to the peace and stability of the Asia-Pacific region and the international community as a “Proactive Contributor to Peace,” and received the understanding and support of the Kosovo side in this regard.

Prime Minister Thaci stated that Kosovo would like to continue to strengthen cooperative relations with Japan and that Kosovo is hoping to receive increased investment from Japan.