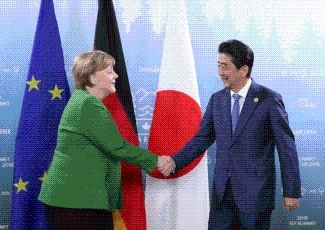 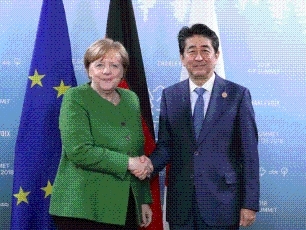 On Friday, June 8, commencing at 5:45 p.m. (local) time for approximately 40 minutes, Mr. Shinzo Abe, Prime Minister of Japan, who was visiting Canada to attend the G7 Charlevoix Summit, held a meeting with H.E. Dr. Angela Merkel, Federal Chancellor of the Federal Republic of Germany. The overview of the meeting is as follows.

Prime Minister Abe once again extended his congratulations on the formation of the new German government, along with stating that he intends to continue to work closely with Germany. Furthermore, Prime Minister Abe extended his congratulations on Germany’s election as a non-permanent member of the United Nations Security Council (UNSC) on the same day, June 8. In response, Chancellor Merkel stated that she is pleased to be able to meet Prime Minister Abe again, and explained that also in light of Japan’s G20 Presidency next year, she hopes to visit Japan soon before that.

The two leaders shared the view that Japan and Germany will work closely together in order to realize the complete, verifiable and irreversible dismantlement (CVID) of all weapons of mass destruction, including biological and chemical weapons, and ballistic missiles of all ranges, by North Korea. Prime Minister Abe also requested Germany’s understanding and cooperation towards promptly resolving the abductions issue, and he obtained Chancellor Merkel’s support.

The two leaders shared the view that Japan and Germany will cooperate to support reform in the Western Balkan countries, which aim to join the European Union (EU). In addition, the two leaders confirmed that they will advance cooperation in the field of Internet of Things (IoT)/Industry 4.0, as noted in the Hannover Declaration that was signed on the occasion of CeBIT (an IT-related exhibition in Germany) in March last year, and that Japan and Germany will lead the digital society. In addition, they shared the view that they will continue to cooperate on having the Japan-EU Economic Partnership Agreement (EPA) and Japan-EU Strategic Partnership Agreement (SPA) signed and enter into force promptly.