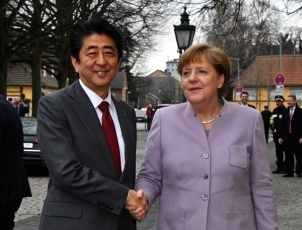 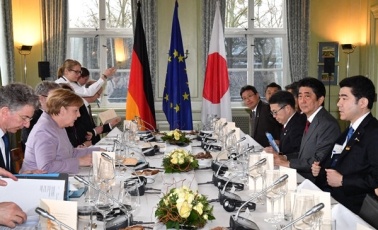 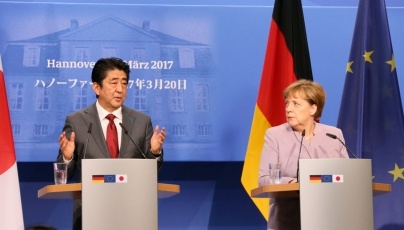 (Photo: Cabinet Public Relations Office)
On Monday, March 20, commencing at 11:50 a.m. (local time) for approximately 90 minutes, Mr. Shinzo Abe, Prime Minister of Japan, held a Summit Meeting with H.E. Dr. Angela Merkel, Chancellor of the Federal Republic of Germany, in Germany, during his visit to attend CeBIT (an IT-related exhibition in Germany). The overview of the meeting is as follows.

The two leaders emphasized that the participation of 118 Japanese firms at this year’s CeBIT symbolizes the close and high-level cooperation between Japan and Germany, and agreed that Japan and Germany are important partners, who are leading countries in Asia and Europe and respond to the various challenges facing the international community based on common values. Moreover, the two leaders shared the view that it is important that Japan and Europe in cooperation with the United States continue to address the various issues facing the international community, and that the G7 is more united than ever and demonstrates unwavering cooperation and commitment on the security and economic fronts.

2. Bilateral cooperation in the economic field

Regarding the Fourth Industrial Revolution, the two leaders welcomed yesterday’s signing of the joint declaration (Hannover Declaration) between the Ministry of Economy, Trade and Industry and the Ministry of Internal Affairs and Communications of Japan, and the Federal Ministry for Economic Affairs and Energy of Germany, and agreed to collaborate even more closely in areas such as innovation, human resources and automobiles. The two leaders also emphasized the importance of promoting cooperation between Japan and Germany in autonomous driving and artificial intelligence, as well as related areas, and taking the lead in transforming the economy and society through the Internet of Things (IoT). Furthermore, the two leaders referred to the exchanges among Japanese and German small- and medium-sized enterprises (SMEs) that are being conducted on the occasion of this year’s CeBIT, and confirmed their intent to further encourage exchanges related to IoT among SMEs towards the creation of new businesses.

The two leaders held wide-ranging discussions on regional situations, such as European Union (EU), Russia and Ukraine, and East Asia, and conducted in-depth exchanges of opinions.

The two leaders shared the view that with the international community entering a “time of change,” unwavering collaboration between Japan, Europe and the United States on the security and economic fronts is more necessary than ever before in order to maintain a free and open international community. Prime Minister Abe also noted the importance of the strong unity of Europe and sought the leadership of Chancellor Merkel in this regard. Furthermore, concerning the withdrawal of the United Kingdom from the EU, Prime Minister Abe emphasized the importance of ensuring transparency and predictability, as well as the establishment of a transition period, and requested that consideration be made for maintaining the smooth economic activities of Japanese businesses.
The two leaders then shared the view that Japan and the EU, together with the United States, must continue to raise the flag of free trade, and confirmed that they will continue to work together to reach an agreement on fundamental elements of the Japan-EU EPA as early as possible.
Furthermore, Prime Minister Abe stated that six years after the Great East Japan Earthquake, reconstruction from the disaster remains one of the most important tasks for the government, and requested the elimination of restrictions on the import of food products produced in Fukushima Prefecture and other areas.

(2) Relations with the United States

The two leaders touched on the fact that they have both held meetings with President Donald Trump recently, and concurred on the importance of Japan and Europe working together with the United States to resolve regional and global issues.

(3) The situation in Russia and Ukraine

The two leaders shared the view that the situation in Ukraine is an important issue for Japan, Europe and the United States, and that it is essential to continue to urge al sides to implement the Minsk Agreements and for Ukraine to advance domestic reforms on its own. Based on this, the two leaders confirmed that they will continue to collaborate closely to improve the situation in Ukraine.
Prime Minister Abe also expressed his determination to resolve the Northern Territories issue, and stated the importance of advancing the dialogue between Japan and Russia.

The two leaders confirmed that Japan and Germany will work together to ensure the effectiveness of the relevant United Nations Security Council resolutions, considering the recent ballistic missile launches by North Korea. Prime Minister Abe also sought the understanding and support of Germany regarding the resolution of the abduction issue.

The two leaders confirmed on the importance of securing a free and open maritime order in the Indo-Pacific region, and to work together to promote the stability and prosperity of the region.

4. Collaboration towards the G7 and G20 Summit Meetings

The two leaders shared the view that it is precisely a free and open economy that forms the foundation of peace and prosperity, and that it is important at this year’s summit meeting to demonstrate to the world that the values, unity and responsibility of the G7 are unwavering. Prime Minister Abe also stated his intention to lead the discussions in order to link the major outcomes of the G7 Ise-Shima Summit, including high-quality infrastructure, health, women, and climate change, to the G20 Hamburg Summit, which Chancellor Merkel will be chairing.