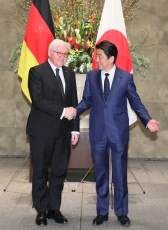 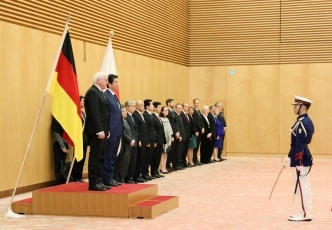 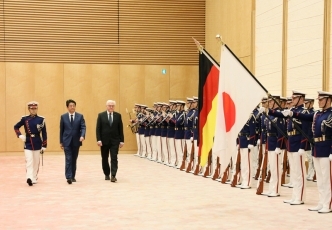 On February 6, commencing at around 6 p.m. for approximately 60 minutes, Mr. Shinzo Abe, Prime Minister of Japan, held a summit meeting with H.E. Dr. Frank-Walter Steinmeier, President of the Federal Republic of Germany, who is visiting Japan. The overview of the meeting is as follows. After the summit meeting Prime Minister Abe and Mrs. Abe held a dinner to welcome President Steinmeier and his spouse, Ms. Elke Büdenbender. The dinner was attended by guests from various fields who have a connection with Japan-Germany relations, and was held in a friendly atmosphere.

(1) Prime Minister Abe welcomed President Steinmeier on his first visit to Japan as President, along with explaining that Germany is an important partner which shares fundamental values with Japan such as freedom, democracy, human rights and the rule of law, and is a powerful driver of European unity, and Japan hopes to coordinate closely with Germany on the various challenges which the international community faces, including the North Korea issue.

(2) President Steinmeier stated that Germany shares values with Japan such as democracy, human rights and the rule of law, and explained that Germany intends to focus on cooperation in these fields.

(3) The two leaders shared the view that this year, which marks the 100th anniversary of the first performance in Japan of Ludwig van Beethoven’s Symphony No. 9 (“Daiku” in Japanese), is named “DAIKU2018,” and that this will be an opportunity to further deepen Japan-Germany exchanges.

(1) With regard to Japan-EU relations, the two leaders confirmed the importance of maintaining unity in Europe, which shares fundamental values, and shared the view that Japan and Germany will coordinate to that end.

(3) In addition, from the perspective of stability within Europe, President Steinmeier welcomed Japan’s contributions to the Western Balkan region through the “Western Balkans Cooperation Initiative,” which Prime Minister Abe proposed when he visited Southeastern Europe recently.

Prime Minister Abe explained that North Korea now poses a threat to all of Europe, including its launch of ballistic missiles with the potential range to reach Berlin, and that there is a need for the international community to unite and work together. The two leaders shared the view that it will be necessary to make North Korea to change its policies by maximizing pressure using all methods, including the full implementation of United Nations Security Council resolutions. In addition, Prime Minister Abe requested understanding and cooperation for the prompt resolution of the abductions issue.