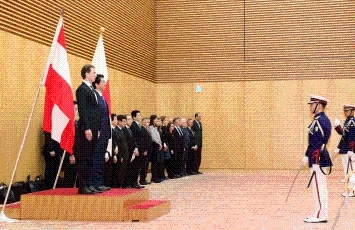 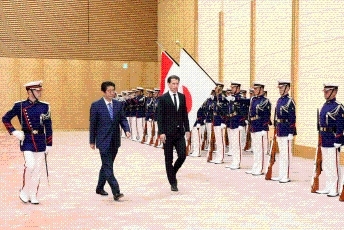 On February 15, commencing at 6:30 p.m. for approximately 45 minutes, Mr. Shinzo Abe, Prime Minister of Japan, held a Summit Meeting with H.E. Mr. Sebastian Kurz, Chancellor of the Republic of Austria during his working visit to Japan. The overview of the meeting is as follows.

(1) At the beginning, Prime Minister Abe welcomed that Chancellor Kurz had visited Japan in this commemorable year, the 150th anniversary of friendship between Japan-Austria, and stated that he hoped to take the opportunity of this year to expand cooperation in a variety of fields, including tourism, business, science, technology and cultural exchanges. Furthermore, Prime Minister Abe stated his gratitude for the leadership of Chancellor Kurz as the chair of the European Union in the second half of 2018 with respect to the entry into force of the Japan-EU Economic Partnership Agreement (EPA) on the first day of this month.

(2) In response, Chancellor Kurz appreciated the warm welcome and stated the foreign minister of Austria planned to visit Japan in March as well as the Federal President of Austria on the occasion of the Enthronement Ceremony in October and that such events were suitable for the 150th anniversary of friendship between Japan-Austria. Furthermore, Chancellor Kurz stated that the entry into force of the Japan-EU EPA created one of the world’s largest economic zones and hoped that this opportunity would deepen the relations between the two countries.

The two leaders exchanged views about the free trade system and confirmed that Japan and Austria would cooperate to maintain and strengthen a free and open economic system. Furthermore, regarding the United Kingdom’s withdrawal from the EU, Prime Minister Abe stated that “no deal” should be avoided.

(1) The two leaders shared the view that they would take the opportunity of the commencement of direct flights between Haneda (Tokyo) and Vienna to revitalize cooperation in tourism, people-to-people exchange and business exchange.

(2) From this perspective, the two leaders welcomed the decision to hold the “Japan-Austria Committee for Issues of the Future” in Asahikawa City, Hokkaido this summer and confirmed the importance of promoting regional exchanges on the local level.

(3) Moreover, the two leaders shared the view that they would strengthen cooperation in academic exchanges and in the field of science and technology.

(1) The two leaders shared the view that the international society should be united as a whole to support the U.S.-North Korea process and they confirmed that two countries would cooperate closely toward the second U.S.-North Korea Summit Meeting planned for the end of this month. Furthermore, Prime Minister Abe requested Chancellor Kurz for Austria’s understanding and cooperation regarding the early resolution of the abductions issue and received the support from Chancellor Kurz.

(2) In addition, Prime Minister Abe explained the “Western Balkans Cooperation Initiative” that he announced in January last year, and the two leaders shared the view that they would cooperate to support Western Balkan countries toward European integration.

Page Top
Back to Japan-Austria Relations