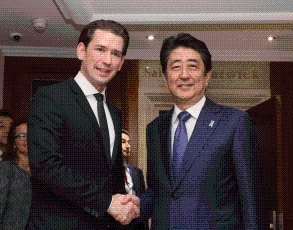 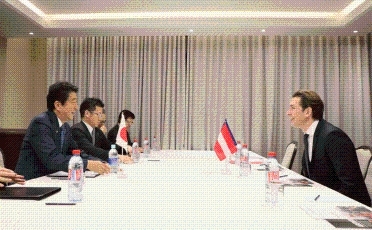 On Friday, October 19, commencing at 4:28 p.m. for approximately 25 minutes, Mr. Shinzo Abe, Prime Minister of Japan, held a meeting with H.E. Mr. Sebastian Kurz, Chancellor of the Republic of Austria, during his visit to Brussels to attend the Asia-Europe Meeting (ASEM) Summit. The overview of the meeting is as follows.

Prime Minister Abe expressed his pleasure to meet Chancellor Kurz for the first time, and explained that he intends to foster the momentum for the 150th anniversary of the establishment of diplomatic relations between Japan and Austria next year with Chancellor Kurz. In response, Chancellor Kurz stated that Japan is an important partner in Asia, and he is pleased to be able to celebrate the 150th anniversary next year. In addition, the two leaders welcomed the entry into force of the new tax convention between Japan and Austria at the end of this month, and shared the view that investment and economic exchanges will be promoted further.

(2) In addition, with regard to the United Kingdom’s withdrawal from the EU, Prime Minister Abe stated that it will be essential that transparency and foreseeability be ensured in the exit process as well as legal stability by establishing a transition period. In response, Chancellor Kurz explained that challenges remain with regard to Brexit, but he will continue to make efforts to resolve them.

The two leaders shared the position that full implementation of the United Nations Security Council (UNSC) Resolutions is necessary for denuclearization of the Korean Peninsula, and confirmed that Japan and Austria will cooperate closely. In addition, Prime Minister Abe requested understanding and cooperation towards the early resolution of the abductions issue, and Chancellor Kurz responded by stating that if there is anything Austria can do, it intends to cooperate.

Page Top
Back to Japan-Austria Relations