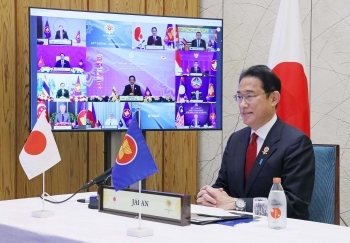 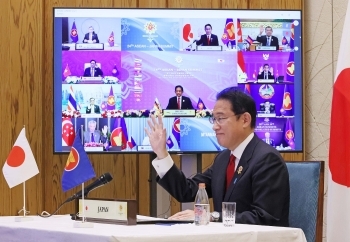 On October 27, commencing at 11:30 a.m. for about one hour, Mr. KISHIDA Fumio, Prime Minister of Japan, attended the 24th ASEAN-Japan Summit Meeting which was held via video conference and chaired by His Majesty Sultan Haji Hassanal Bolkiah of Brunei Darussalam. An overview of the meeting is as follows.

Following the opening remarks of His Majesty Sultan Haji Hassanal Bolkiah of Brunei Darussalam, Prime Minister Kishida delivered his opening remarks and expressed that Japan would vigorously advance efforts to achieve a "Free and Open Indo-Pacific (FOIP)" in cooperation with ASEAN. Especially, he expressed his intention to welcome ASEAN leaders to Japan in 2023, which marks the 50th Anniversary of the ASEAN-Japan Friendship and Cooperation, and hold a Commemorative Summit meeting to raise ASEAN-Japan relations to a new stage.

2. Support for countermeasures against the COVID-19 pandemic

3. ASEAN Outlook on the Indo-Pacific (AOIP)

Prime Minister Kishida then spoke about the AOIP as follows.

Following Prime Minister Kishida's opening remarks, ASEAN countries congratulated Prime Minister Kishida on his assuming the office and the successful hosting of the 2020 Tokyo Olympic and Paralympic Games, and expressed their high evaluation and appreciation for Japan’s leadership to counter COVID-19 including its provision of medical supplies including vaccines, the establishment of the ACPHEED, and financial support. They also expressed their gratitude for Japan's AOIP cooperation and their strong hope for continued close cooperation. Many countries expressed their support to Japan’s intention to hold a Commemorative Summit in Japan in 2023, which marks the 50th Anniversary of the ASEAN-Japan Friendship and Cooperation.

It is in our common interest to make the Indo-Pacific a free, open, and peaceful sea. Japan shares serious concerns with ASEAN countries and strongly opposes challenges to a free and open maritime order based on the rule of law, with particular reference to the East and South China Seas.

ASEAN countries also mentioned the importance of freedom of navigation and flight over the South China Sea, and the importance of peaceful resolution of disputes in line with international law, including the United Nations Convention on the Law of the Sea.

Prime Minister Kishida stated that North Korea launched ballistic missiles this month and that the peace and security of the region and international community is under threat. He also stated that the full implementation of United Nations Security Council resolutions is essential to achieve the complete, verifiable and irreversible dismantlement (CVID) of all weapons of mass destruction and ballistic missiles of all ranges of North Korea. In addition, he asked for the continued understanding and cooperation of all countries toward the immediate resolution of the abductions issue.

The participating countries also made remarks on the importance of denuclearization in the Korean Peninsula. They expressed their support for the resolution of the abductions issue.

Regarding the situation in Myanmar, Japan supports ASEAN’s efforts including the “Five-Point Consensus,” and its swift implementation. Japan urged Myanmar to constructivly respond.

The countries also mentioned the importance of cooperating for the swift implementation of the "Five-Point Consensus" and humanitarian assistance to the people of Myanmar.

Prime Minister Kishida stated his intention to continue to work closely together to ensure that the Indo-Pacific region will remain a free, open, peaceful, and prosperous region.