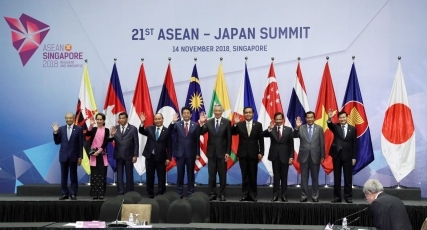 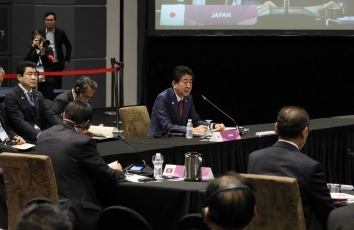 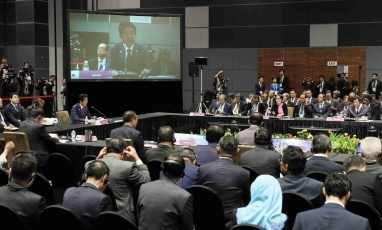 On Wednesday, November 14, from 3:55 p.m. (local time), for about 1 hour, the Japan-ASEAN Summit Meeting was held in the Republic of Singapore chaired by H.E. Mr. Lee Hsien Loong, Prime Minister of Singapore. Mr. Shinzo Abe, Prime Minister, attended from Japan. The overview of the meeting is as follows.

Japan’s assistance to ASEAN has exceeded its commitment to provide 2 trillion yen over five years. We will support private investment and advance the development of quality infrastructure in accordance with international standards while respecting ASEAN’s unity and centrality. Specifically, Japan will utilize a new financing facility of the Japan Bank for International Cooperation (JBIC) and support for a variety of infrastructure projects that contribute to global environmental preservation.

Looking to the next five years, Japan will newly support industrial human resource development of approx. 80,000 people, including the digital sector such as artificial intelligence (AI), as “the Industrial Human Resource Development Cooperation Initiative 2.0.”

As a standard-bearer of free trade, Japan will promote free and fair rules throughout the world through World Trade Organization (WTO) reform and other measures. From this perspective, the TPP-11 Agreement entering into force by the end of the year is an important achievement. Japan will aim to expand TPP-11, achieve swift conclusion of the Regional Comprehensive Economic Partnership (RCEP) negotiations, and realize the early signing of the Protocol to Amend the ASEAN-Japan Comprehensive Economic Partnership (AJCEP) Agreement.

Japan and Singapore will co-host the ASEAN Smart Cities Network (ASCN) Tokyo High-level Meeting next year. Japan will cooperate with ASEAN to realize ASCN by partnering with Society 5.0, the ASEAN-Japan Innovation Network, and the Japan-ASEAN STI for SDGs Bridging Initiative among others.

Japan will utilize the Japan-ASEAN Integration Fund (JAIF) and collaborate with ASEAN in the area of disaster management, including cooperation through the ASEAN Coordinating Centre for Humanitarian Assistance on Disaster Management (AHA Centre).

Japan will expand cooperation with ASEAN in combating marine plastic debris, in addition to addressing climate change based on the Japan-ASEAN Environment Cooperation Initiative.<./p>

Japan will work to bring about a balanced healthcare system under the Asia Health and Wellbeing Initiative.

Japan will continue to deepen exchanges in the areas of education, science and technology, culture, and sports through the “WA Project” and other initiatives, building momentum towards the Olympic and Paralympic Games Tokyo 2020.

Japan will continue to advance necessary reforms of the ASEAN-Japan Centre.

Japan will promote practical defense cooperation under the Vientiane Vision.
Following the establishment of the ASEAN-Japan Cybersecurity Capacity Building Centre (AJCCBC) in Bangkok in September this year, Japan will continue to collaborate with ASEAN in the area of cybersecurity.

i. Free and open Indo-Pacific

Japan will continue to work closely with ASEAN member states to maintain and strengthen a free and open Indo-Pacific.

It is necessary to fully implement United Nations Security Council (UNSC) resolutions in order to achieve complete, verifiable and irreversible dismantlement (CVID) of all weapons of mass destruction and ballistic missiles of all ranges by North Korea as stipulated in UNSC resolutions.
Japan will wish to cooperate for responding to ship-to-ship transfers prohibited by the UNSC resolutions. Japan hopes to have ASEAN’s understanding and cooperation towards the early resolution of the abductions issue.

In response, ASEAN made congratulatory remarks regarding the 45th anniversary of ASEAN-Japan Friendship and Cooperation. In addition, many countries commended Japan’s cooperation in various areas including disaster management and strengthening connectivity, and expressed appreciation for Japan’s efforts to realize a free and open Indo-Pacific. Issues on North Korea and the South China Sea were also raised.

Finally, as the Chair of ASEAN and with the approval of all participating countries, Singapore declared the issuance of the Joint Statement of the 21st ASEAN-Japan Summit to Commemorate the 45th Anniversary of ASEAN-Japan Friendship and Cooperation and concluded the meeting.