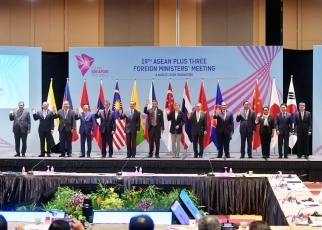 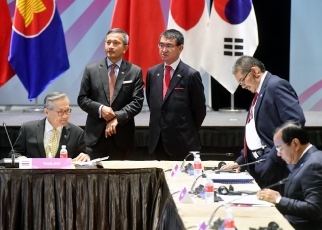 On August 4, from 9:10 a.m. to 10:30 a.m., the ASEAN Plus Three Foreign Ministers Meeting was held in the Republic of Singapore. Foreign Minister Mr. Taro Kono attended the meeting. The overview of the meeting is as follows, with a focus on statements by Minister Kono.

(1) Japan appreciates APT’s contribution to peace, stability and prosperity in East Asia and 21 years of advancing cooperation in areas such as food security, finance, economy, education and public health.

(2) Given the current global situation where protectionism is on the rise in the world, Japan would like to achieve the swift conclusion of the RCEP negotiations for making a comprehensive, balanced, high-quality economic rules.

2. Review of ASEAN Plus Three cooperation and its future direction

by extending support for human resources development and quality infrastructure development in accordance with international standards.

(2) Japan has promoted human resources development through the “Industrial Human Resource Development Cooperation Initiative”. Approximately 80,000 people, almost twice as many as the original target, went through the program from 2015 to 2017. Japan will continue to support ASEAN’s efforts to develop quality and skilled workers through the “Innovative Asia Initiative” and “AUN/SEED-NET” program.

(3) Under the Asia Health and Wellbeing Initiative (AHWIN), Japan also aims to bring about a balanced and comprehensive healthcare system in Asia.

(4) Japan will promote people-to-people exchanges and continue sports exchanges as the Tokyo 2020 Olympic and Paralympic Games are now just around the corner.

(5) The recently introduced “JBIC New Facility” will provide support for a variety of infrastructure projects that contribute to global environmental preservation, such as renewable energy projects including wind and geothermal power and smart city.

(6) Climate Change threatens security and economic prosperity in Asia and the world. The “Japan-ASEAN Climate Change Action Agenda” will promote our cooperation in this area.

(7) We appreciate the warm actions, messages and encouragement from your people and government for those who suffered in the heavy rain and flood in July. In light of lessons learned from the past disasters, Japan will work with you to increase the capacity of disaster management and resilience of the Asian society.

(8) The Southeast Asia Disaster Risk Insurance Facility (SEADRIF) will provide financial resilience against natural disasters. SEADRIF is planning to launch a catastrophe risk insurance pool for Lao PDR and Myanmar in the middle of 2019.

(9) The issue of marine litter is now a global concern. We would like to initiate a program with APT members. Japan also intend to take up this issue at the G20 meetings next year.

(10) Japan has been playing a leading role in distributing emergency rice for areas hit by disasters in Southeast Asia under the APTERR agreement.

(11) Over seven years have passed since the Great East Japan Earthquake on March 11, 2011. While many countries have already lifted import restrictions on Japanese foods, some countries are still keeping import bans even now. Japan would like to request to lift such regulations as they are no longer based on scientific evidence.

In response, many countries made statements welcoming the promotion of practical cooperation among the ASEAN Plus Three over the past 21 years, in such fields as finance, economy, food security, poverty alleviation, natural disaster management, people to people connectivity, and tourism.

(1) Japan welcomes the Inter-Korean Summit Meeting. It led to North Korea’s commitment toward a “complete denuclearization” which was reaffirmed at the U.S.-North Korea Summit Meeting. I wish to take this opportunity to commend the efforts made by ROK.

(2) I would also like to pay tribute to China for reaching out to North Korea.

(3) The international community must remain unified in keeping the measures based on the relevant United Nations Security Council resolutions.

(4) We seek cooperation for an early resolution of the abductions issue.

In response, many countries raised the issue of North Korea, and stressed the importance of the complete denuclearization of North Korea while welcoming the Inter-Korean Summit and the U.S.-North Korea Summit.