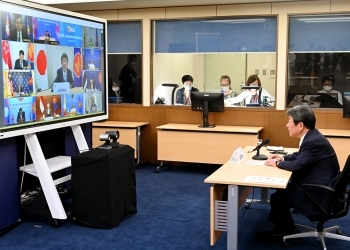 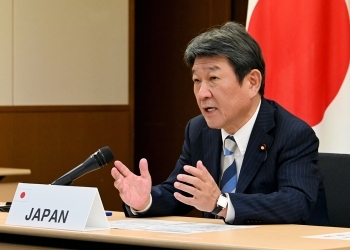 On September 9, commencing at 7:45 p.m. (Japan time) for approximately 70 minutes, the Japan-ASEAN Ministerial Meeting was held in an online format. Mr. MOTEGI Toshimitsu, Minister for Foreign Affairs of Japan, attended from Japan and co-chaired the meeting alongside H.E. Mr. Pham Binh Minh, Deputy Prime Minister of the Socialist Republic of Vietnam. The overview of the meeting is as follows.

At the outset, Deputy Prime Minister Minh of Vietnam welcomed the steady progress achieved in Japan-ASEAN cooperation and expressed his hope to further develop the strategic partnership between Japan and ASEAN.

In response, Minister Motegi stated that as each country endeavors to combat the novel coronavirus disease (COVID-19), Japan, as a true friend of ASEAN, intends to cooperate closely to overcome this difficult situation. As a concrete measure, he expressed his aim to fully support the establishment of the ASEAN Centre for emerging diseases and public health emergencies (tentative name), and, as the flagship of Japan-ASEAN cooperation, to protect the people of ASEAN from the threat of infectious diseases, jointly develop the Centre as a hub for countermeasures against infectious diseases in ASEAN for years to come. Minister Motegi also expressed Japan's support for and cooperation with the establishment of the COVID-19 ASEAN Response Fund, which aims to procure medical supplies and develop vaccines, and announced that Japan had decided to donate US$1 million as its own contribution.

In addition, Minister Motegi stated that the ASEAN Outlook on the Indo-Pacific Region (AOIP) and Japan's Free and Open Indo-Pacific (FOIP) vision have much in common, and he expressed he wishes to work together to concretely develop form to Japan-ASEAN cooperation regarding the AOIP.

In addition, Minister Motegi stated that Japan issued the Japan-U.S. Joint Ministerial Statement on the Japan-U.S. Mekong Power Partnership (JUMPP)on September 8th, which aims to strengthen cooperation in the power sector within the Mekong region. He said that in accordance with this statement, Japan hopes to steadily advance the development of quality energy infrastructure and the extending of technical assistance.

On behalf of ASEAN, Deputy Prime Minister Minh reviewed the outcomes of Japan-ASEAN cooperation in the fields of political security, economic cooperation, and socio-cultural cooperation, and expressed his hopes for future progress. Subsequently, the ASEAN countries expressed their gratitude for Japan's support to ASEAN, including the establishment of the ASEAN Centre for emerging diseases and public health emergencies and the contribution to the COVID-19 ASEAN Response Fund, and expressed their hope for future cooperation by means of the Japan-ASEAN Integration Fund (JAIF).

In response, Minister Motegi explained that US $50 million had been allocated for establishing the ASEAN Centre for emerging diseases and public health emergencies and that he hoped to accelerate the review process so that it can be launched as soon as possible. He stated that FOIP and AOIP share many fundamental values, such as the rule of law, freedom of navigation and openness, and stated that Japan would support AOIP through specific projects.

Minister Motegi also stated that he would like to accelerate equitable access to COVID-19 vaccines, such as through the COVAX Facility, reopen the flow of people between Japan and the ASEAN countries, and cooperate on various measures to combat COVID-19 (UNCLOS).

3 The Regional and International Situation

Minister Motegi stated that unilateral attempts to change the status quo in the East and South China Seas were continuing and intensifying, and that the situation is deteriorating. He further stated that the Code of Conduct (COC) on the South China Sea must not infringe on the rights of third countries and that the COC must conform with the United Nations Convention on the Law of the Sea.

Minister Motegi encouraged other ministers  to support the U.S.-North Korea process, and also stated that full implementation of UN Security Council resolutions is critical , including countering " ship-to-ship transfers". In addition, he asked for continued cooperation from all countries towards the early resolution of the abductions issue.

In response, some countries spoke of the denuclearization of the Korean Peninsula and the importance of full implementation of UN Security Council resolutions. There were also remarks on the importance of resolving the abductions issue.

Minister Motegi stated Japan's grave and growing concerns over the recent situation surrounding Hong Kong and that the recent series of developments, including the enactment and subsequent implementation of the national security law, undermines the international community's trust in the principle of 'One Country Two System' framework, and that it is important to uphold a free and open system in Hong Kong under the "One Country Two System" framework and ensure the democratic and stable development of Hong Kong.

Minister Motegi concluded by saying that the response to COVID-19 has further reinforced the ties between the people of ASEAN countries and the people of Japan, and that he hoped to continue to enhance the cooperation between Japan and ASEAN in a variety of areas.