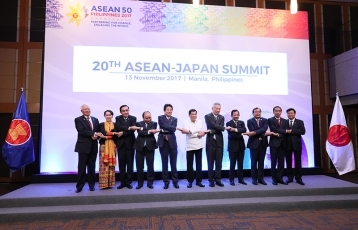 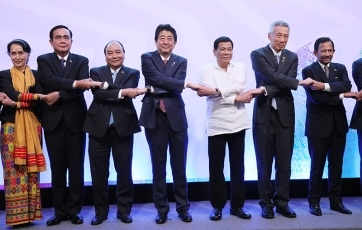 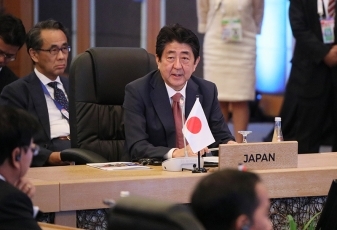 Photo: Cabinet Public Relations Office
On Monday, November 13, commencing at 7:30 p.m. for approximately one hour Prime Minister Shinzo Abe attended the Japan-ASEAN Summit Meeting held in Manila, the Republic of the Philippines chaired by His Excellency Mr. Rodrigo R. Duterte, President of the Philippines. The overview of the meeting is as follows.

Prime Minister Abe congratulated the 50th anniversary of the establishment of ASEAN.

Prime Minister Abe expressed his expectation that ASEAN, which is faces two oceans, the Indian and the Pacific Oceans, will lead the world together with Japan to advance the free and open international order based on the rule of law over the next 50 years.

(3) The cooperation and way forward

Prime Minister Abe stated that Japan will cooperate to realize a more integrated collective by strengthening the initiatives under the "four pillars of partnership" announced at the ASEAN-Japan Commemorative Summit Meeting in 2013 and utilizing various tools, including the Asian Development Bank (ADB).  In response, all ASEAN countries congratulated the victory in the last general elections and expressed their pleasure to work with Prime Minister Abe again.  Furthermore, many countries expressed their support for the ASEAN's Joint Statement issued by Brunei and their appreciation for Japan's cooperation thus far.  In addition, they showed their motivation for further strengthening the partnership with Japan and their recognition for Japan's various initiatives, especially in such areas as the development of quality infrastructure and human resources.

In response, some leaders expressed their serious concerns over North Korea issues, and some made statement relating to the importance of the rule of law in regards to the South China Sea issues.