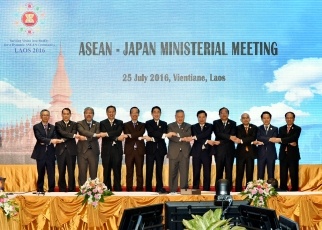 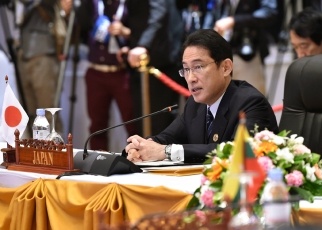 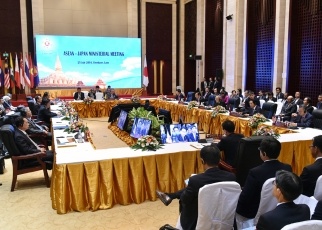 On July 25 (Monday), for approximately one hour from 11:30 a.m. (local time), the Japan-ASEAN Ministerial Meeting was held in Vientiane, Laos. The overview of the meeting is as follows. Mr. Fumio Kishida, Minister for Foreign Affairs of Japan, and the Honorable Pehin Dato Lim Jock Seng, Minister at Prime Minister’s Office and Second Minister of Foreign Affairs and Trade of Brunei Darussalam, co-chaired the meeting.

1 Review of the Japan-ASEAN cooperation and its future direction

Foreign Minister Kishida stated that Japan strongly supports the centrality and unity of ASEAN as an equal and strategic partner, and strongly hopes that the ASEAN Community, as the center of regional cooperation, will take the lead on the stability and prosperity of the region based on the rule of law. He also stated that Japan supports the eight priority areas of Laos in this year, and will continue its all-out support for efforts for further integration of ASEAN. Furthermore, Foreign Minister Kishida stated that Japan has steadily fulfilled its commitments. He said that regarding Japan's commitment of ODA totaling 2 trillion yen for five years announced in 2013, Japan has already implemented more than 1.7 trillion yen, with regard to the human resource development of 8,000 people for 5 years as the ASEAN-Japan Health Initiative announced in 2014, over 4,500 people has been already benefited and regarding the Industrial Human Resource Development Cooperation Initiative to train 40,000 people over three years announced in 2015, more than 15,000 from ASEAN countries has already been trained.

Many ASEAN Member States welcomed progress of cooperation between Japan and ASEAN in the four areas under the Vision Statement on ASEAN-Japan Friendship and Cooperation and appreciated Japan's assistance for the ASEAN Community such as enhancing connectivity, narrowing gaps and its consistent support for the centrality of ASEAN.

(1) Cooperation in the economic area

Foreign Minister Kishida stated that Japan will continue to provide all-out support for strengthening the ASEAN Community and its inclusive and sustainable growth toward the goals of further integration of ASEAN by 2025 while also sparing no efforts for the development of the Mekong region, which will be the key to ASEAN integration, by seeking to strengthen connectivity, advance industries, improve quality of life, and support human resources development through the Expanded Partnership for Quality Infrastructure, the Japan-Mekong Connectivity Initiative, the Industrial Human Resource Development Cooperation Initiative, and Innovative Asia to receive 1,000 excellent foreign students from Asia over the next five years. Foreign Minister Kishida also expressed his expectations regarding the deepening of the economic relationship through the ASEAN Japan Comprehensive Economic Partnership (AJCEP) Agreement etc., the negotiations on the ASEAN-Japan Regional Air Services Agreement, and a new role for the ASEAN-Japan Centre.

Foreign Minister Kishida stated that Japan will also contribute to improve the quality of life of the people by taking advantage of the experience and knowledge in Japan on such issues as the empowerment of women for which support will be provided through the Japan ASEAN Women Empowerment Fund, scheduled to be launched soon, and new challenges in the area of healthcare, such as lifestyle diseases, healthcare disparities, and aging. He also stated that Japan will continue to promote cooperation on disaster risk reduction through the ASEAN Coordinating Centre for Humanitarian Assistance on disaster management (AHA Centre). He also explained that in order to promote mutual understanding through people-to-people exchanges, Japan is conducting the exchange of approximately 3,700 people this fiscal year through JENESYS 2016, and last fiscal year conducted approximately 380 multi-directional exchange project of art and culture under the WA Project, with more than 800,000 people participating.

The ASEAN Member States welcomed the Japan ASEAN Women Empowerment Fund and appreciated Japan's contribution in health areas through the Japan ASEAN Health Initiative and its cooperation in disaster risk reduction such as support for the AHA Centre. The ASEAN Member States also appreciated Japan's undertakings for people-to-people exchanges such as JENESYS and WA-Project.

(3) Cooperation in political and security areas

Foreign Minister Kishida stated that maintaining a stable international order based on the rule of law is the precondition for regional prosperity, and that Japan, together with ASEAN, will contribute to securing peace and stability and prosperity of the regional and international community under its policy of ''Proactive Contribution to Peace'' based on the principle of international cooperation and the Legislation for Peace and Security, which concretely puts such efforts into practice.
Foreign Minister Kishida strongly condemned acts of terrorism including the terrorist attack in Dhaka, and stated that Japan will strengthen cooperation with ASEAN to counter increasing threat of terrorism based on violent extremism through such means as the ASEAN-Japan Counter-Terrorism Dialogue, support for the enhancement of counterterrorism capabilities of each country, and addressing root causes of terrorism. He also stated that the Government of Japan will work as one in promoting support for the enhancement of capabilities for securing cybersecurity.
Furthermore, Foreign Minister Kishida stated that Japan has decided to provide support for the establishment of the ASEAN Regional Training Center for VTS (Vessel Traffic Services) Operators and the hydrographic survey of the Straits of Malacca and Singapore, and will otherwise continue to support the enhancement of the maritime law enforcement capabilities of ASEAN countries in order to promote the safety of maritime traffic and the rule of law on the seas.

The ASEAN Member States welcomed Japan's contribution to the region and international community under the policy of ''Proactive Contribution to Peace'' and appreciated Japan's support in maritime areas. They also expressed their intention to deepen cooperation on counterterrorism.

Foreign Minister Kishida expressed his serious concern over the escalation of the situation in the South China Sea, and stated that the South China Sea is a sea lane of critical importance to Japan and is also important to the peace and stability of the region as a whole, that it is necessary to comply with international law and to secure freedom of navigation in these waters, and that all parties concerned should exercise self-restraint in conduct of activities that would raise tensions and pursue peaceful resolution of issues in accordance with international law including the UN Convention on the Law of the Seas. Foreign Minister Kishida stated that the award by the Arbitral Tribunal between the Philippines and China is legally binding on the parties to the dispute, the parties to this case are required to comply with the award. He expects that the parties' compliance with this award will eventually lead to the peaceful settlement of disputes in the South China Sea. He also strongly expected the full and effective implementation of the Declaration on the Conduct of Parties (DOC) in the South China Sea and the early conclusion of Code of Conduct (COC) in the South China Sea, and stated that the South China Sea issue should be addressed in accordance with the principle of the rule of law.

Many ASEAN Member States expressed their concerns on recent situation in the South China Sea and stated importance of freedom of navigation and over-flight, peaceful resolution of disputes in accordance with international law including UNCLOS, self-restraint in the conduct of activities which increase tensions, non-militarization, not using force or threat, full implementation of DOC and early conclusion of COC. ASEAN Member States also welcomed or supported respect for legal and diplomatic processes and the arbitral tribunal award between the Philippines and China

With regards to North Korea's nuclear and missile threat, Foreign Minister Kishida stated that a resolute response is necessary, that it is important to strictly implement the relevant Security Council resolutions and to report the implementation status to the Security Council, and that Japan will spare no effort to provide necessary cooperation including assistance for capacity building regarding the implementation the resolutions. Foreign Minister Kishida also expressed Japan's expectation for the understanding and cooperation from ASEAN countries to achieve the return of all the abductees to Japan at the earliest possible date.

The ASEAN Member States expressed their concern on nuclear and missile development of North Korea, and mentioned the importance of complying with the Security Council resolutions and their expectation for an early resumption of the Six-Party Talks. Several countries also stated that the abductions are a serious humanitarian issue and they share Japan's concern.