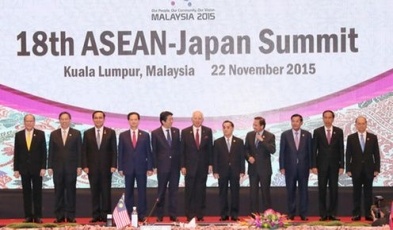 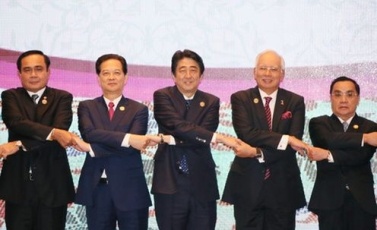 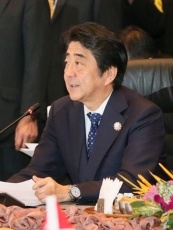 1 Review of Japan-ASEAN cooperation and the way forward

Prime Minister Abe congratulated ASEAN leaders for the establishment of the ASEAN Community and for setting a new integration goal. He stated that it is extremely important that ASEAN will be stable and prosperous, as a partner that shares such universal values as the rule of law and democracy, and Japan will continue to give its full support for ASEAN's integration efforts. He said that cooperation between ASEAN and Japan is making steady progress in the four areas of the Vision Statement on ASEAN-Japan Friendship and Cooperation and Japan has steadily implemented its commitments. He also said that regarding Japan's commitment of Official Development Assistance (ODA) totaling 2 trillion yen for five years announced in 2013, Japan has already implemented 1 trillion yen and with regard to the human resource development of 8,000 people for 5 years under the ASEAN-Japan Health Initiative, the number of people who benefited from the project already reached over 2,000.
The ASEAN side praised close relationship between ASEAN and Japan for 40 years and welcomed steady progress of the cooperation under the Vision Statement.

Prime Minister Abe stated that, to support ASEAN's further integration, sustainable and inclusive growth, Japan will take the following measures, in cooperation with Economic Research Institute for ASEAN and East Asia (ERIA) as well: He welcomed the conclusion of service negotiations for the ASEAN Japan Comprehensive Economic Partnership (AJCEP) and would like to accelerate coordination for concluding negotiations on investments as soon as possible.
The ASEAN side appreciated Japan's past assistance for the community building of ASEAN, and welcomed its initiatives such as the ''Partnership for Quality Infrastructure.''

Prime Minister Abe stated that as the regional security environment becomes more severe, Japan is determined to contribute further to the peace, stability and prosperity of the region and international community under the policy of Proactive Contribution to Peace based on the principles of international cooperation. He said that the ''Legislation for Peace and Security'' is a means to put these into practice in concrete manner and Japan will further promote security cooperation with ASEAN Member States (AMSs), in areas such as United Nations peace keeping operations.
He also said that Japan will support AMSs seamlessly for their ability for maritime security and will further deepen cooperation with ASEAN in peace building assistance, fighting terrorism including violent extremism and transnational crime, and cyber security.
The ASEAN side supported the ''Legislation for Peace and Security'' and expressed their expectation for Japan's contribution for peace and security of the region.

(3)Cooperation in other areas

Prime Minister Abe stated that Japan will continue assisting ASEAN with disaster risk reduction, such as through cooperation with the ASEAN Coordinating Centre for Humanitarian Assistance on Disaster Management (AHA Centre) and the ERIA. He appreciated all AMSs for becaming co-sponsor of the proposal to establish ''World Tsunami Awareness Day''.
He also said that Japan will deepen heart-to-heart partnerships through JENESYS 2015, the WA Project and Sport for Tomorrow.
The ASEAN side appreciated Japan's assistance for disaster risk reduction and its effort for exchanges such as JENSYS 2015.

Prime Minister Abe stated that in any maritime area, coastal states are required under international law, whether for military use or for civilian use, to refrain from unilateral actions that would cause permanent physical change to marine environment in maritime areas pending final delimitation. He expressed serious concerns over the situation in the South China Sea, where unilateral actions, including large scale and rapid land reclamation, building of outposts and their use for military purposes, which change status-quo and raise tensions, are still on-going.
He explained that in the East China Sea, China is making incursions into Japanese territorial waters with its official vessels and continues to unilaterally develop resources in maritime areas pending delimitation between Japan and China. He also introduced that Japan is requesting China to swiftly implement the ''2008 Agreement'' reached to cease unilateral action and cooperate on resources development in the East China Sea.
Emphasizing that now is the time to strictly abide by the ''Three Principles of the Rule of Law at Sea,'' he said that Japan will keep encouraging China to play more constructive and cooperative role towards regional and global issues, while complying with common international rules and norms.
The ASEAN side commended Japan's approach on the issue of the South China Sea and its support to improve ability for maritime security.

Prime Minister Abe pointed out that it is important for North Korea to refrain from provocations and to comply with UN Security Council resolutions etc., and called on AMSs for their continued understanding and cooperation toward an early resolution of the abductions issue.
The ASEAN side expressed its support for Japan's position on the abductions issue.