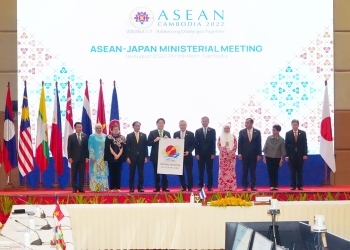 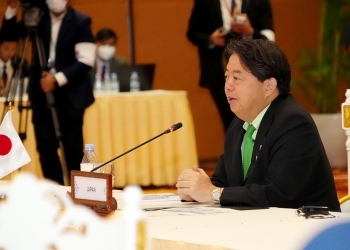 On August 4, commencing at 9: 50 a.m. local time (11:50 am, JST) for approximately 1 hour and 10 minutes, the ASEAN-Japan Foreign Ministers’ Meeting was held in Phnom Penh, Cambodia. Mr. HAYASHI Yoshimasa, Minister for Foreign Affairs of Japan, attended the meeting. The meeting was co-chaired by Minister Hayashi and Thai Deputy Prime Minister and Foreign Minister Don Pramudwinai. The official Logo and Catchphrase for the 50th Year of ASEAN-Japan Friendship and Cooperation were announced at the meeting. The overview of the meeting is as follows.

2. Review of ASEAN-Japan Cooperation and its Future Directions

Minister Hayashi and Minister Don made concluding remarks and reaffirmed that ASEAN and Japan continued to work closely together for the success of this year’s Summit and the 50th Year of ASEAN-Japan Friendship and Cooperation next year.