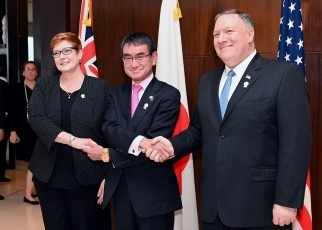 On August 1, commencing at 4:00 p.m. for approximately 40 minutes, Mr. Taro Kono, Minister for Foreign Affairs of Japan, who is visiting Thailand to attend ASEAN-related Foreign Ministers’ Meetings, held the Ninth Japan-United States-Australia Trilateral Strategic Dialogue (TSD) with the Honorable Mike Pompeo, Secretary of State of the United States, and Senator the Hon Marise Payne, Minister for Foreign Affairs of the Commonwealth of Australia. The overview of the meeting is as follows.

1. At the beginning, the three Ministers shared the view that the cooperation among the three countries, which have the will and capability to support regional stability and prosperity, is important more than ever. They also affirmed to strengthen trilateral cooperation towards achieving a Free and Open Indo-Pacific based on the rule of law.

2. The three Ministers welcomed the concrete progress made in trilateral cooperation towards a Free and Open Indo-Pacific. They shared the view on promoting investment in quality infrastructure, in line with the principles confirmed at the G20, and on further collaborating on assistance for capacity building in maritime security.

3. The three Ministers had a fruitful discussion about North Korean issues, including the abductions issue, in light of the latest situation. They confirmed that they would continue to closely collaborate towards complete denuclearization of North Korea.

4. The three countries shared concerns over the situation in the South China Sea and affirmed to closely collaborate on this issue.