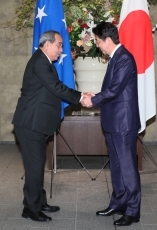 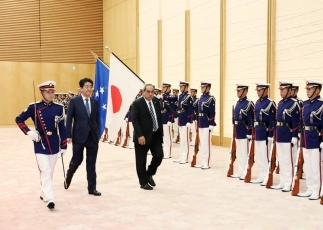 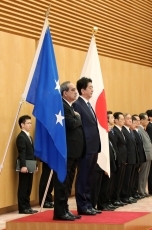 On October 25, commencing at shortly after 6:15 p.m. for approximately 35 minutes, Mr. Shinzo Abe, Prime Minister of Japan, held a summit meeting with H.E. Peter Martin Christian, President of the Federated States of Micronesia (FSM) on his official working visit to Japan. The overview is as follows.

(1) Prime Minister Abe stated that Japan is placing emphasis on its relationship with FSM, an important partner bound to Japan by historical ties and the Pacific Ocean which has strongly and consistently supported Japan in the international arena. Prime Minister Abe also stated that next year will be a milestone of the 30th anniversary of the establishment of diplomatic relations between Japan and FSM and the Eighth Pacific Islands Leaders Meeting (PALM8) will be held in the same year. Prime Minister Abe expressed that he would like to work together with President Christian to greatly develop Japan-FSM relations and would like to cooperate under the “Free and Open Indo-Pacific Strategy.”

(2) In response, President Christian expressed his gratitude for the warm welcome, congratulated Prime Minister Abe on his election victory, offered condolences regarding the typhoon damage, and also expressed his gratitude for the support of Japan. Furthermore, he stated that with next year’s PALM8 and 30th anniversary of the establishment of diplomatic relations in mind, he wishes to not only further strengthen bilateral relations but also to closely cooperate in responding to the regional situation and within the international arena. 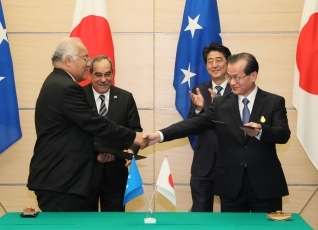 (1) Prime Minister Abe stated that he was pleased by the signing of the exchange of notes concerning the grant aid with the purpose of donating heavy machinery for infrastructure development, and expressed Japan’s commitment to continue supporting the development of FSM.

(2) The two leaders confirmed that they would promote bilateral cooperation in the areas of economic relations, people-to-people exchange, fishing, and the recovery of the remains of the war dead.

The two leaders agreed that they will cooperate to the maximum extent toward the success of the PALM8 which will be held in May 2018.

(1) Regarding the situation of North Korea, Prime Minister Abe stated the importance of full implementation of the United Nations Security Council (UNSC) resolutions and applying maximum pressure on North Korea in order to change its policy and sought understanding and support regarding the abductions issue. In response, President Christian stated that he wishes to cooperate with Japan so that the problem of North Korea will be solved.

(2) Regarding maritime security, the two leaders agreed on the importance of a free and open maritime order based on the rule of law, and President Christian stated that he highly appreciated the strategic role played by Japan in this region. 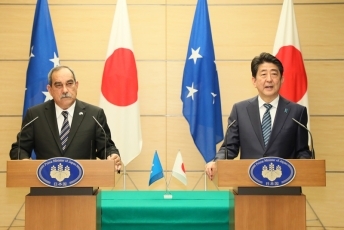 Prime Minister Abe expressed his gratitude for the consistent support of FSM for the positions of Japan regarding United Nations Security Council reform and various international elections. The two leaders confirmed that they will continue to closely cooperate in the international arena. Furthermore, President Christian expressed his support for the resolution on the elimination of nuclear weapons in the United Nations General Assembly that Japan is promoting.

Page Top
Back to Japan-Micronesia Relations