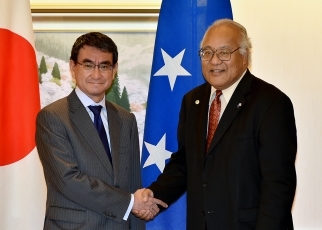 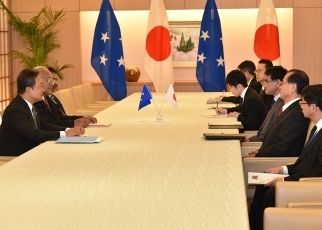 On October 24, commencing at 11 a.m. for approximately 30 minutes, Mr. Taro Kono, Minister for Foreign Affairs, held a meeting with the Hon. Lorin S. Robert, Secretary of Department of Foreign Affairs of the Federated States of Micronesia, who is accompanying H.E. Peter Martin Christian, President of the Federated States of Micronesia on his Official Working Visit to Japan. The overview of the meeting is as follows.

1. First, Minister Kono welcomed Secretary Robert’s visit to Japan, stating that Micronesia is an important partner which is particularly close to Japan, Minister Kono explained that he hopes to cooperate closely towards the Eighth Pacific Islands Meeting (PALM8) and the 30th anniversary of the establishment of diplomatic relations between Japan and Micronesia next year. In response, Secretary Robert explained that Japan is a second home to him, and he expressed gratitude for Japan’s courteous hospitality and stated that he hopes to further deepen the cooperative relationship between the two countries in the future.

2. The two ministers shared the view that they will cooperate toward PALM8, which will be held in May next year.

3. Furthermore, the two ministers exchanged views on the situation of North Korea, and Secretary Robert expressed a strong support for Japan’s position concerning North Korea, including on the abductions issue.

4. Minister Kono expressed his appreciation for Micronesia’s consistent support for Japan in the international arena, and the two ministers shared the view that the two countries will continue to coordinate closely.