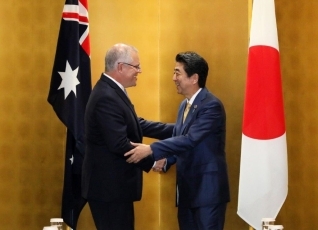 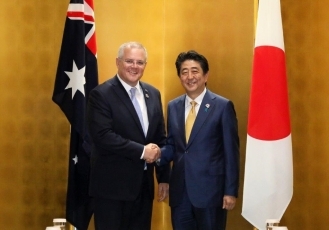 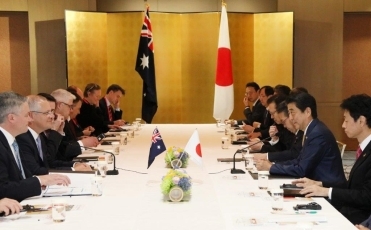 On June 27, commencing at 5:50 p.m. for approximately 30 minutes, Mr. Shinzo Abe, Prime Minister of Japan held a meeting with the Hon. Scott Morrison, Prime Minister of the Commonwealth of Australia, who is visiting Japan to participate in the G20 Osaka. The overview of the meeting is as follows:

2. The leaders exchanged views on the agenda of G20 Osaka Summit. PM Abe said, “Let us together announce the commencement of “Osaka Track” to work on the rule making of free flow of data with trust and electronic commerce,” to which PM Morrison agreed. PM Abe mentioned that “the exploitation of the internet for terrorist purposes is impermissible,” and the two leaders shared the view to continue their collaboration on the issue of terrorism and internet.

3. In regards to realizing the free and open Indo-Pacific, the Prime Ministers agreed to further collaborate in the field of aid for capacity building in maritime security or infrastructure in Southeast Asia as well as the Pacific Island Countries.

4. Furthermore, the leaders exchanged views on bilateral relations such as promotion of security cooperation including the negotiation of the Japan-Australia Reciprocal Access Agreement (Tentative), and economic cooperation including hydrogen energy, as well as regional issues such as North Korea, and shared the view to continue their close collaboration.