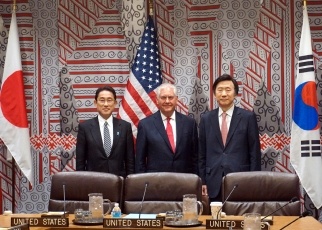 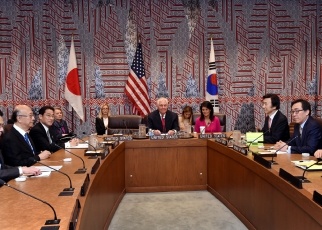 On April 28, commencing at 9:25 a.m. (local time) for approximately 30 minutes, Mr. Fumio Kishida, Minister for Foreign Affairs, on the occasion of his attendance at the Thematic Meeting of the United Nations Security Council (UNSC) on the Denuclearization of North Korea in New York, held a Japan-U.S.-Republic of Korea (ROK) Trilateral Foreign Ministers’ Meeting with the Honorable Rex Tillerson, Secretary of State of the United States of America, and H.E. Mr. Yun Byung-se, Minister of Foreign Affairs of the ROK, after approximately two months from the previous meeting held on the occasion of the G20 Foreign Ministers’ Meeting in February this year. The overview of the meeting is as follows.

1. Minister Kishida emphasized that a resolute response, including strict measures, needs to be taken against any further provocations, that China’s role is extremely important in addressing with the issue of North Korea, and that further efforts by China are necessary. Furthermore, Minister Kishida appreciated the Trump Administration’s resolute position as represented by “all options are on the table.”

2. The three foreign ministers affirmed close collaboration, including at the UN and conducted policy coordination among Japan, the United States and the ROK. They shared the view that they will continue to promote Japan-U.S.-ROK cooperation, including in the area of security.

3. Moreover, Minister Kishida once again gained the understanding and support of both the United States and the ROK with regard to the abductions issue.