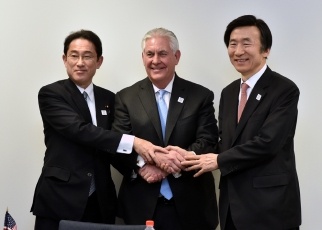 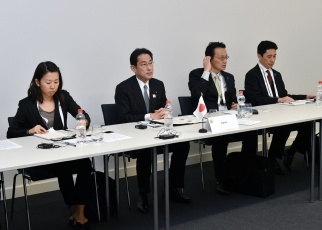 On February 16, commencing at 5:30 p.m. (local time) for approximately 35 minutes, Mr. Fumio Kishida, Minister for Foreign Affairs, held a Japan-U.S.-Republic of Korea (ROK) Trilateral Foreign Ministers’ Meeting for the first time in approximately five months with the Honorable Rex Tillerson, Secretary of State of the United States of America, and H.E. Mr. Yun Byung-se, Minister of Foreign Affairs of the ROK, on the margins of the G20 Foreign Ministers’ Meeting in Bonn, the Federal Republic of Germany. The overview of the meeting is as follows.

2. Minister Kishida emphasized that Japan, the U.S. and the ROK must be united to take a resolute stance against North Korea’s nuclear and missile issues, which pose a new level of threat, and also must lead the international community’s response. The three ministers shared the view that Japan, the U.S. and the ROK will coordinate to strongly urge North Korea to refrain from any further provocation and comply with the relevant United Nations Security Council (UNSC) resolutions.

3. Minister Kishida explained that the abductions issue by North Korea is the issue concerning the sovereignty of Japan and the lives and safety of the Japanese citizens, and is the most important issue for the Abe Administration. Minister Kishida called for the continued understanding and cooperation of both the U.S. and the ROK, and he gained the support of both countries.

4. The three ministers shared the view that Japan, the U.S. and the ROK will continue to coordinate closely and proactively contribute to regional peace and stability, including issues regarding North Korea.