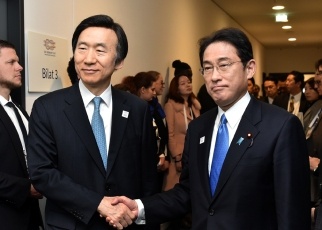 On February 17, commencing at around 11:35 a.m.(local time) and lasting for approximately 30 minutes, Mr. Fumio Kishida, Minister for Foreign Affairs, who is visiting Bonn, Germany, held a Japan-Republic of Korea (ROK) Foreign Ministers’ Meeting with Mr. Yun Byung-se, Foreign Minister of the Republic of Korea. The overview is as follows (From the Japanese side Mr. Kenji Kanasugi, Director-General of the Asian and Oceanian Affairs Bureau, and from the ROK side Mr. Chung Byung-won, the ROK Foreign Ministry's Director-General for Northeast Asian Affairs and others attended the meeting).

1. Minister Kishida expressed deep regret at the installation of a comfort woman statue on the sidewalk in front of Japan’s Consulate-General in Busan at the end of last year and strongly requested its removal. In response, Minister Yun commented that it is not appropriate in light of international protocol to build a comfort woman statue in front of an embassy or a consulate and explained measures being taken by the ROK side. The two ministers reconfirmed their view that it is important to steadily implement the agreement reached at the end of 2015. Minister Kishida strongly stated that Japan cannot accept any more to land on Takeshima and install a comfort women statue and also noted concern about contents on the website of the organizing committee for the PyeongChang 2018 Olympics and Paralympics.

2. Regarding the issues on North Korea, the two ministers agreed to continue close collaboration as confirmed at the Japan-U.S.-ROK Foreign Ministers’ Meeting held on the previous day.