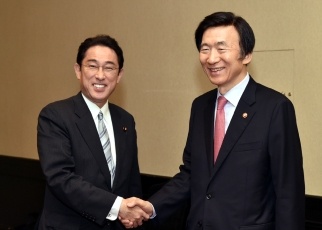 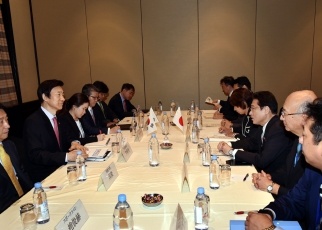 On September 18, commencing at around 2:54 p.m. (local time) for approximately 45 minutes, Mr. Fumio Kishida, Minister for Foreign Affairs, held a Japan-Republic of Korea (ROK) Foreign Ministers' Meeting with H.E. Mr. Yun Byung-se, Minister of Foreign Affairs of the ROK during his visit to New York. The overview of the meeting is as follows. (From the Japanese side, Mr. Koro Bessho, Permanent Representative of Japan to the United Nations (UN), Mr. Kenji Kanasugi, Director-General of the Asian and Oceanian Affairs Bureau and from the ROK side H.E. Mr. Oh Joon, Permanent Representative of the ROK to the UN, Mr. Kim Hong-kyun, Special Representative for Korean Peninsula Peace and Security Affairs of the Ministry of Foreign Affairs and others attended the meeting).