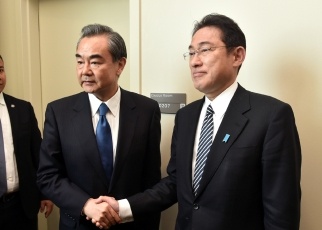 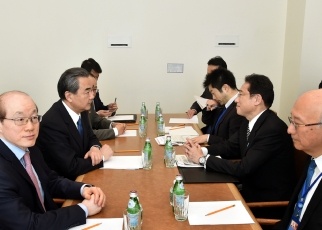 On April 28, commencing at around 11:30 a.m. (around 12:30 a.m. on April 29, Japan time) for over 40 minutes, Mr. Fumio Kishida, Minister for Foreign Affairs, who is visiting New York to attend the United Nations Security Council Ministerial Session on the non-proliferation of North Korea, held a Japan-China Foreign Ministers’ Meeting with Mr. Wang Yi, Minister of Foreign Affairs of the People’s Republic of China. The overview of the meeting is as follows.

(1) The two foreign ministers shared the view that they will make efforts together to deal with matters of concern appropriately and expand and strengthen the positive aspects so the relationship between Japan and China proceeds to improve further, while continuing to hold high-level dialogues from this year to next year. Furthermore, the two foreign ministers held a frank exchange of views on approaches to the Japan-China relationship and how to move the relationship forward in the near term.

(2) In the course of the exchanges, and in light of the fact that this year is also the 45th anniversary of the normalization of diplomatic relations between Japan and China, the two sides shared recognition that the relationship between Japan and China that has been built through the efforts of their predecessors thus far must be valued. The ministers also discussed the Belt and Road Forum for International Cooperation scheduled to be held in Beijing in mid-May.

(1) The two ministers exchanged views on the recent situation in North Korea, along with sharing the view that Japan and China will work together on the North Korean issue.

(2) Minister Kishida explained to Minister Wang that it will be important to display a resolute stance regarding further provocative actions by North Korea, and urged China to fulfill a greater role. The two ministers shared the view that Japan and China will continue to seize various opportunities to pursue communication on this issue between their foreign ministers as well.

(3) Minister Kishida once again conveyed his expectation for the Chinese side’s understanding and support regarding the abductions issue.