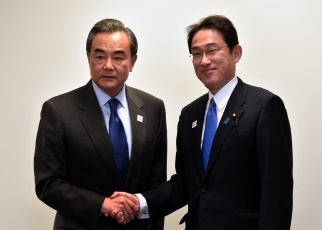 On February 17, commencing at 10:50 a.m. (6:50 p.m. Japan Time) for approximately a little more than 40 minutes, Mr. Fumio Kishida, Minister for Foreign Affairs, who is visiting Bonn, Germany to attend the G20 Foreign Ministers’ Meeting, held a meeting with Mr. Wang Yi, Minister of Foreign Affairs of the People's Republic of China. The overview of the meeting is as follows.

(1) In his opening remarks, Foreign Minister Wang stated the following.
This year marks the 45th anniversary of the normalization of diplomatic relations between Japan and China, and next year will be the 40th anniversary of the conclusion of the Treaty of Peace and Friendship between Japan and China. The two sides should take this opportunity to earnestly review the experiences and lessons on both the positive side and negative side in the development of bilateral relations without forgetting the original intentions of our forebears in both countries, firmly support the political foundations of the bilateral relationship, and develop the Japan-China relationship in the appropriate direction.

(2) In response, Foreign Minister Kishida stated the following.
At the G20 and APEC summit meetings last year, Prime Minister Abe and President Xi confirmed that they would work together towards the improvement of Japan-China relations by expanding and strengthening the positive aspects while dealing appropriately with matters of concern between Japan and China. We would like to go forward with the improvement of the Japan-China relationship under the concept of a “Mutually Beneficial Relationship Based on Common Strategic Interests” this year as the 45th anniversary of the normalization of diplomatic relations between Japan and China.

(3) The two foreign ministers had a candid exchange of views regarding how to move forward on Japan-China relations this year, including their views on the various issues of concern. In the exchange, Foreign Minister Kishida raised the matter of the East China Sea, stating that the situation has not improved and urged efforts from the Chinese side.

(5) The two foreign ministers renewed their understanding of the importance of Japan-China relations this year as the 45th anniversary of the normalization of diplomatic relations between Japan and China, and agreed to continue to work together towards the improvement of the relationship under the concept of a “Mutually Beneficial Relationship Based on Common Strategic Interests.”