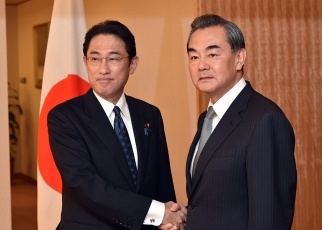 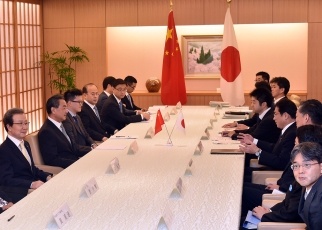 Mr. Fumio Kishida, Minister for Foreign Affairs of Japan, met with Mr. Wang Yi, Foreign Minister for the People’s Republic of China, who was visiting Japan to attend the Japan-China-ROK Trilateral Foreign Ministers’ Meeting, for approximately one hour from 3:35 p.m. on August 24. (Attendees on the Japanese side included Mr. Yutaka Yokoi, Japan’s Ambassador to the People’s Republic of China; Mr. Kenji Kanasugi, Director-General of the Asian and Oceanian Affairs Bureau; and others; and on the Chinese side included Mr. Cheng Yonghua, China’s Ambassador to Japan; and Mr. Xiao Qian, head of Foreign Affairs of the People's Republic of China Asia Division; and others). Key points are as follows.

Both Foreign Ministers commented that meaningful discussions took place at the Japan-China-Republic of Korea (ROK) Trilateral Foreign Ministers’ Meeting held in the morning of the same day.

(1) Minister Kishida clearly and directly stated Japan’s views regarding the recent situation in the East China Sea, including the Senkaku Islands, and noted that Japan could not accept China’s continuation of unilateral behavior even though nothing has changed in Japan’s actions. He strongly urged China to (i) bring the situation completely under control, (ii) prevent recurrences, and (iii) improve the overall conditions in the East China Sea, amongst others. He also expressed very strong concern about China’s unilateral development of resources and requested a resumption of discussions based on the “2008 Agreement.” He also called for prompt adoption of a maritime and air communica mechanism between the defense authorities of the two countries.

(2) In response, Minister Wang Yi explained China’s views regarding the situation concerning the Senkaku Islands and acknowledged the importance of preventing conditions in the East China Sea from getting worse and avoidance of unexpected situations. He also commented that China hopes to improve Japan-China relations through repeated efforts for mutual understanding, such as holding maritime discussions by senior officials from Japan and China.

(3) In response, Minister Kishida commented that Japan hopes to move forward with improvements in the Japan-China relationship from a broad perspective through dialogue, including a meeting between Mr. Shinzo Abe, Prime Minister of Japan, and Mr. Xi Jinping, President of the People’s Republic of China, during the G20 Summit Meeting when conditions in the East China Sea improve.

(2) The two Ministers made comments regarding the South China Sea issue based on their respective views.